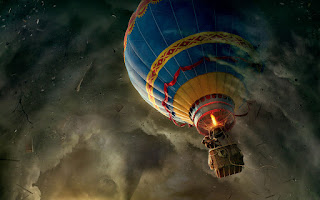 A few months ago I asked Raziel some questions about what time travel was like.  In order to perform this kind of communication I enter a trance state and then engrave the Hebrew letters for Raziel on the astral vision, light then streams through the letters and they become like gates.  Below are the details of the communication.

- From their point of view the future already exists as does the past, and they see them as places rather than as times, as you would step into the next room that is time travel for them

- Time did not play out ''once'', from beginning to end, as a certain sequence of events in linear time and was then saved in the temporal dimension, rather the two depths, future and past, cause each other simultaneously

- We call this the wellspring (gimel lamed) and the beginning (reshit), since they cause each other any point in time is the beginning

- You can access a different version of this universe but only from the dimension above time, this would not be time travel but something else

- Imagine there are three loops in any given fixed time stream, the past, the present and the future and each loop is pinched at its conflux with the next loop

- Pinchpoints occur in every time stream and are fixed events in history, which includes the future, thus each timestream is divided into past, present and future with the pinchpoint occuring at a point in the linear time of this universe, there are two pinchpoints in each timestream

- As you approach a pinchpoint the percieved flow of time increases

- For our closed timestream the entities are as follows:

- All three groups are genetically related via the Tree of Life, in that they share common ancestors, but dinosaurs and Utopians can only meet in the present, as an entity from the past approaches the pinchpoint between the past and the future it gets pushed back and vice versa

My reflections on this:

I can understand how the paradoxes involved in time travel would affect the nature of time.  As you invent time travel in the future all time after that time becomes one time, it would effectively be simple space.  So the invention of time travel effectively ends time as we know it.  And this has already happened.

Perhaps the pinches occur naturally in the overall structure of time and are a feature of all timestreams but these pinches then cause time travel as opposed to the invention of time travel causing the pinches???  Or maybe they cause each other?

He did not give me the dates of the actual pinchpoints.

In multiverse theory when we observe the wave form it collapses into the universe that we percieve but it does not mean that other universes are not happening - we just can't see them.  By choosing which path to take at any given time are we in fact surfing universes.  Is magick the process of selecting the universe you want to live in?  As time passes are we on some level surfing universes?

Probably should look for common ancestor with dinosaur and explore this point in the ToL
https://en.wikipedia.org/wiki/Diadectomorpha
Posted by Blogos at 4:56 AM