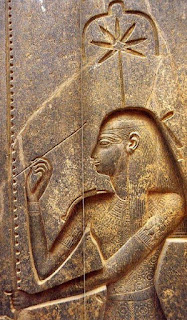 My partner has been steadily building a relationship with the Goddess Seshat through ritual offering and prayer and she reached a point where she wanted to experience some ceremonial magic.  The altar was set with a personally sculpted small statue of the Goddess, a small leopard statue, a moonstone specifically dedicated to her, and three candles one silver, one purple and one black.  The ritual began with her reciting her prayer 27 times to some Egyptian meditation music, an evocation, and then a series of questions that she would like for Seshat to answer:

- what happens to the soul after death?
- is there a physical world?
- are you telling me I should work with Wadjet?*

Mr partner's experience was confined to a set of visual/audio hallucinations/communications which she interpreted as answers to the questions.  The first question involved the statue of Seshat seemingly levitating and generating some kind of halo while she heard the word ''spirit'' in her mind, the second question resulted in the statue seemingly flipping from 2d to 3d which my partner interpreted as being related to the holographic universe theory and the 3rd question was not met with an answer. 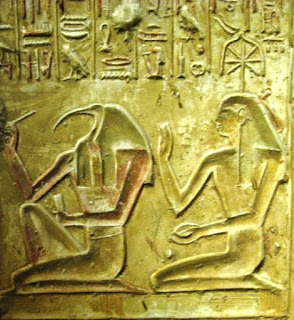 While sitting behind her I concentrated on using my astral vision to attempt to see Seshat - to some extent I was consciously attempting to remote view Seshat through time, to see the person that the Goddess emerged from, using the ritual as a means of targetting and zooming in.  As I tried to concentrate I went through the standard clouds of nagging thoughts and itches/fidgets - ''breaks''.  As I cleared these attachments I tried to find a way to Seshat.  My thoughts landed on Thoth and my mind's eye traced the line of his beak.  As the beak was ''traced'' into the astral it rotated 90 degrees and became my beak.  I was flying in the body of an Ibis low over the muddy banks of a reedy river when I came across Seshat who appeared as a young woman in a smock with some purplish eye makeup but otherwise covered in mud, and studying and playing with that same mud.  As I observed her she became rapidly aware of my spying and I experienced a strong pain in my third eye which rose in intensity until it ended the vision.  What communication there was between us was telepathic. I got the impression [she told me???] that she was a low born girl, ''a claydigger's daughter'' who was immensely intelligent and complex.

The answers or rather reactions I recieved were as follows: to the question about the soul after death I got the sense that she had attempted to answer this question pursued it to considerable depths and even in spite of her intelligence could not answer it; the question about the physical world she thought the question was stupid and answered it with a yes and a raise of her muddy hand; the last question fell on deaf ears she didn't seem to know who Wadjet was or why that would matter.  I think at this point she also began to ''see'' the ritual, to ''gaze'' back into our world at which point she commented that she didn't look like her statue.

The following day I taught the lesson on astral projection to my partner and the rest of the class and she followed through with the instructions and had her first astral experience using the Seshat prayer as a mantra to steady her mind.  In this vision, she passed through mist [her visualization of the membrane] to find herself on some sort of Egyptian boat with Seshat who was a young girl.  She felt the intelligence radiating and that she was in the presence of a prodigy who was believed to be some sort of goddess by the people.  Seshat waved her hands and a group of leopards approached the banks of the Nile and then began following the boat with her and she realised that she had power over the world and access to true magic.  She got the sense that Seshat subsequently died early and that whoever she was inhabiting the point of view of had lost a dear friend.  This vision had a massive emotional impact on my partner. 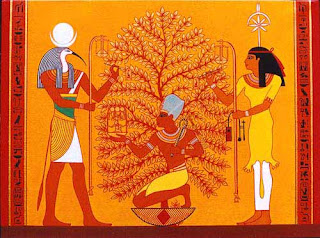 In conclusion Seshat seems to be an extremely intriguing character if perhaps a difficult Goddess to work with in the beginning being seemingly somewhat socially awkward and aloof with her brilliance (this might not be fair) and the intrusion of Wadjet into my partner's sphere is clearly coming from something else, worryingly or otherwise.  I am really happy that she has experienced the astral with Seshat and that in itself has brought her answers and more questions about her mortality/immortality and as a teacher I am happy that by following the instructions I was able to get a student there already.  I am looking forward to the results of the others.

*The Goddess Wadjet is a character in a story she is writing and the work began after the work with Seshat so she was curious as to whether they were linked or not, whether Seshat was somehow recommending she work with Wadjet.
Posted by Blogos at 1:06 AM