2020 - The Year of Lilith, The Green Phase I, The Great Degreening

MING - Klytus, I'm bored what play thing can you offer me today?
KLYTUS - An obscure body in the S-K system.  The inhabitants refer to it as ''Earth''... Will you destroy this Earth?
MING - Later, I like to play with things for a while... before annihilation


Covid infected meat plants, incredible swarms, algal blooms, vegans, eco-terrorists, climate whiplash, drought, floods, Islam all featured in discussions of the great Degreening over the last few posts and way back when the anti-quarters were first understood. The Green Wind now blows, Green Recovery of the economy is the hot topic - and the Green Lion is now established.  With the right will and determination we can put this world to rights, we can be that Green Lion spirit that uses our righteous indignation, saves Nature and protects Earth and Civilization!  We can finally be the hero inside ourselves!!! Or will we discover, as I suspect, that it is too late, that too many tipping points have been breached, that ''our affairs come too late'', that Rosencrantz and Guildenstern are, so to speak, already fucked - and that the Green Lion is about to be slain by the Sun.  You must invert the image to find the hidden stone - and, green of heart be aware, that Green Spirits, not Black Spirits, are next on the chopping block.


I had a dream the other night that I was escaping from a dilapidated and weird, Innsmouth-like town on a stormy coast that had a big top that featured a giant cartoon Cthulhu - as a real Cthulhu rose out of the ocean behind it and ripped the fake one to pieces.  Welcome to the next three months.  If you are a ''green spirit'', get the fuck out of dodge and brace your psyche for impact. 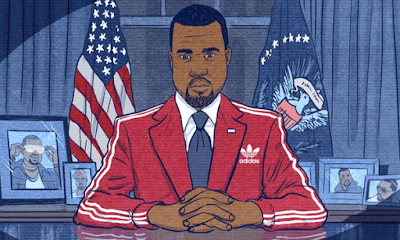 Although the announcement occurred on the 4th of July, I would argue this is one of the absolute final events of the Nigredo (Black Phase) - a closing event, if you will, and a foreshadowing.  Remember that our final wind (anemoi) will be yellow (anti-Citrinatis) and blow from the West - this covers the period of the US election. This indicates to me that we should take this run seriously or expect that Kanye will play an important role in the election i.e. this is not a joke.  Review the list below and get ahead of the weather: 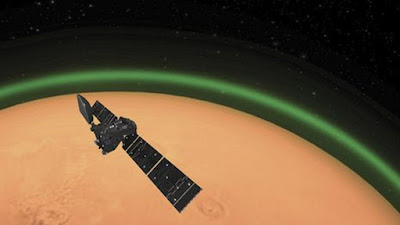 Black Neutron stars were not thought possible until the final phases of the Nigredo.  Now they are a thing, like monster Black Hole star destroyers.  There has been some top tier space trolling from the boys in NASA for the ''transition'' to the Green Phase as well with Mars going Green and the release of a video of a decade of the Sun. 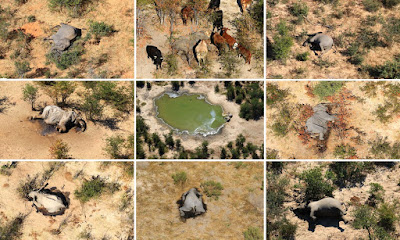 I think there is a good argument that the freak die off of 350 elephants in Botswana is one of the major transition events - as elephants are a water symbol par excellence.  These images cut through to a great many people about the need to return their attention to saving the environment.  You can see from the image above that toxic algal build up could be one of the reasons behind their deaths.  Apparently algae is also threatening the Alps (although the snow is turned pink, the algae are black green, as you can see in a picture on the link).  This troubling story from Florida about deadly amoebae should give us all pause for thought about heading into any green lakes this Summer.  On that note, remember in 2019 that cyan was used during the green phase (as the blue end of the green ''pallette'' for those who are into the intricacies of this from the colour theory - expect ''de-cyaning'' whatever that might mean...) so this should broaden our attention to definitely include cyanobacteria in this summer's microorganism woes. 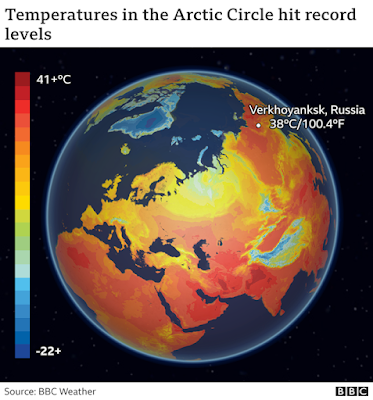 We knew that the transition event(s) should be centred on the North and during the transition our attention was repeatedly drawn to Russia, via various accusations of paid bounties, election rigging and arctic diesel oil spills, alongside the arctic temperature spike.  These temperatures are also contributing to massive plagues of mosquitoes linking us back to the general prediction of national and international bug swarms. The idea of the Arctic being at those temperatures also cut through to the intelligentsia in a big enough way to draw attention back from black lives matter to green issues.  The temperatures shown in the image above also exactly match the expectations from the climate variation due to drop in global dimming (i.e. anti-Albedo for those following this baroque reverse physical and psychological alchemy) that I was pointing out would happen several days after the planes were grounded and the factories were halted.  If you want conspiracy I would argue that the central purpose of the pandemic shutdown was to cause the environmental whiplash as it is this, more than Lilifluenza, that is ultimately going to be used to drive the changes to meet the Green Agenda. 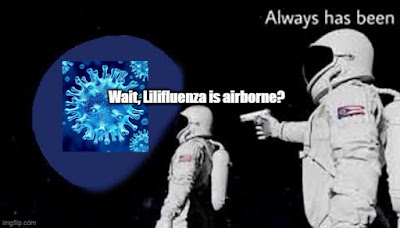 So there are a few new things about Lilifluenza worth bearing in mind - the growing suspicion that it is airborne (i.e. always was, we had strong suspicions during early stages of outbreak in China - so it was truly a demonic wind) - and that HCQ is showing good signs when used as treatment to avoid infection, possibly linking us back to ''the Blazing Star'' via/with Artemisia/Wormwood, if this happens outside of Africa.  The large countries that are now getting hammered by both lilifluenza and locusts, Brazil and India, both feature green prominently in their flags. There are increasing signs that this a very broad disease that affects numerous organ systems with particular attention being drawn at the moment to the effects on the brain - I am not sure exactly how this ties into the alchemy of the (anti) Green Lion at this point - effects are fatigue, cognitive impairment, etc - but we could say it is certainly affecting the psychology physiologically as well as the environmental affects/shock of the lock-down/economic impact/health of self and family members on the mind. 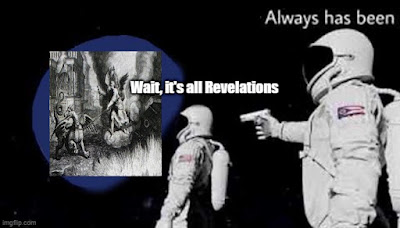 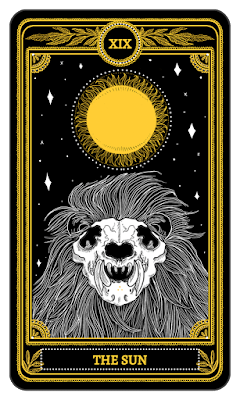 With the economic forecasts emerging and the H2 data under analysis is it possible that we will see a run on or decline in the greenback during the de-greening?  Oil prices remain much lower from where they were a year ago, undermining the currency in this way.  It looks like there are many possible powder kegs that could blow up in the next few months that could trigger hyper inflation or deflation.  De-dollarization was an intended outcome of the global elite in order to bring in a digital currency and cashless society.  Gold, which is the alchemical metal of the Sun is looking strong as well.  Could this be a potential interpretation of the reversal of the Green Lion, where the Sun eats him rather than getting eaten, i.e. collapse of dollar, rise in gold? 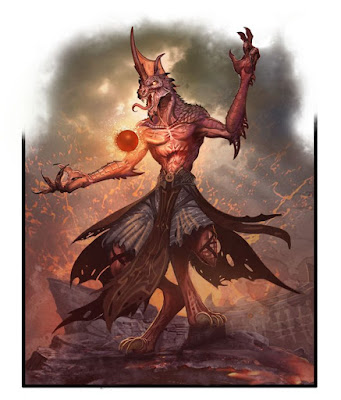 In the Dark Sun trilogy a group of shady magicians draw power by draining the life out of the environment around them, The Defilers.  While I understand the range of opinion on climate change I honestly cannot understand how we can drill/mine trillions of megatonnes of concentrated death energy to satisfy our every whim and fancy without causing environmental consequences and in this way we are all Defilers to one extent or another.  I acknowledge the existence of weather weapons that could cause effects similar to climate change so accept that this could be happening instead to drive various agendas but to deny that it is happening at all - when the developing world has been ravaged by it for several decades - seems absurd to me.  Close to a million people in Japan are being urged to evacuate today because of rain.  Even if you believe that carbon dioxide is not driving climate change (and that weather weapons are behind it) you should accept that fossil fuel extraction causes despoliation of the environment in a host of different ways - acid rain, mountain top blasting, oil spills, cancer causing pollutants, etc, etc.  I think its highly suspicious that nuclear energy is not being considered as an obvious way out of our predicament and that we are heading towards a short-term geoengineering de-growth private green energy, public subsidised carbon capture type feudal society plan instead.  Nuclear energy has been pre-nerfed, in the public eye, by series like Chernobyl and Dark - could this be because we are cosmically banned from nuking ourselves free, or just that the chief Defilers among us have a plan for how they keep power and it doesn't involve nuclear?  Question in the first case is why, question in the second case is why not?

Flash, I love you, but we've only got fourteen hours to save the Earth!