If blood will flow when flesh and steel are one,
Drying in the colour of the evening sun,
Tomorrow's rains will wash the stains away,
But something in our mind's will always stay,
Perhaps this final act was meant,
To clinch a lifetime's argument,
That nothing comes from violence
And nothing ever could

Naya Rivera, the Glee Star who drowned last week, means ''New Riverbank.''  Although I am not denying the suggestions of her death being part of a cleaning out potential witnesses operation I do think its curious that this is a significant water event with a very watery name.  Lake Piru derives its name from the Shoshonean pí idhu-ku meaning ''grass, plant''.  Lake Grass?  Lake Green?  New Riverbank Drowns in Green Lake.  You see?


THE RAIN AND WASHOUT 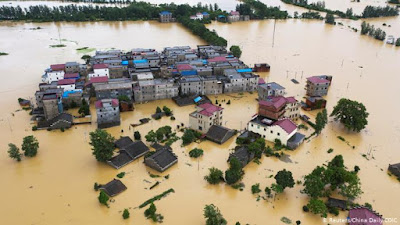 Recently Japan had to ask one million people to evacuate ahead of torrential rain, this was followed in short order by rains and flooding that are affecting nearly 40 million people in China.  Why would rain contribute to the Great Degreening - wouldn't that be the green water element quarter in overdrive not underdrive, ''forwards'' and not inverted?  Just like fires, floods are also a degreening force, an aspect of Lilith the lawnmower man, as they wash away nutrient rich topsoil. Within a week of a flooding event the mosquito (and other parts of the crawling chaos) populations can explode; forcing flooding evacuees together can also help to spread Lilifluenza, COVID-19; farmers describe moonscapes where once fertile fields stood.  Counter-intuitively floods can also lead to drought because they alter the shape of riverbeds and create cracks where they were none before.These rain events and the others that will accompany them over the rest of the Green Phase are continuing to lay the foundation for a terrible terrible Fall.  The constant flooding, the feeling of being cold and damp, of your possessions being ruined also contributes to the deflating Green Lion, its difficult to maintain anger when you are soaked through. 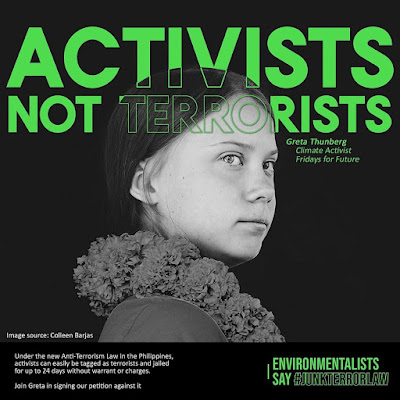 We've been talking for a while now about the Green Phase and how it will inevitably tie in with the Great Degreening, or Great Green Disappointment - as the guiding force behind this operation is a desire to empty people out, to make them into hopeless, (digitally) malleable husks. In the last few phases I cautioned environmental optimists that they were next on the chopping block (by optimists I meant that they believe in the power of the human spirit to remake our world a paradise).  Under a day ago, Pearl Greta Thunberg posted the image above regarding the accusations/associations of eco-terrorism that are ongoing in the Philippines right now bringing that prediction into sharp relief.  Although criminalising environmental movements has been ''on the burner'' in many countries for a while now we see this attempt to raise awareness early in the Green Phase.  If you look at the way the image is constructed this is also priming for radical people in various movements who may think eco-terrorism is now necessary, or signalling for sleeper agents ensconced within them. Technically speaking though Greta, you are a terra-rist, just like I am an eso-terra-cist!  Get it?  Ha! 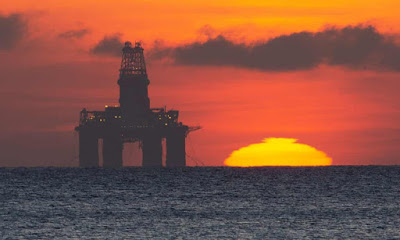 Governments put green recovery ''on the back-burner'' according to the Guardian - were the cries for green-washing simply window dressing propaganda for a society and elite that have no intention of going through with the necessary changes to save the planet - well without short-term geo-engineering?  I think a Green Revolution is inevitable at some point very soon but what geo-engineering will do is buy the economy time to shift away from fossil fuels and into green energy while maintaining the same power hierarchy (public subsidised private green energy), controlling the narrative and avoiding extreme economic disruption.  Trying to explain to young or idealistic people why you can't just switch off the oil without utterly destroying society is difficult but ultimately this is why geo-engineering of a form is a given at this point - whether it works or not remains to be seen.  Also trying to explain that green energy should be owned by the public seems insanely difficult like teaching a dog to do card tricks.  A washed out, exhausted population is going to have even more limited capability to make this argument - the most essential argument we have ever faced as a species and even more pressing than who is going to do the washing up tonight - Naya Rivera? - I think she did it last night.