The Year of Lilith - Entering the Yellow Zone, The Great De-Yellowing

Two weeks to the Yellow Zone and the narrative of the Green Zone has been clearly established exactly along the lines laid out in the Hermetic Lessons many months ago.  Environmental whiplash. Tipping points crossed. No more time. Electric car + solar panels not enough, sorry babe, maybe mass climate engineering and carbon capture will buy time? Major planetary projects are necessary immediately. This article too conservative. Systems collapse within a decade: droughts; derecho; dustbowl; - in grain baskets and orchards for years to come. As each system supporting our world collapses it unleashes a demon, if you will, an elemental force, an evil wind that roars out of control. Firenadoes. Water spouts. Lightning. Pink Lightning! Plague winds. Locust swarms. Pentacanes. These stack and blend into legions. Commanded by vengeful animal spirits. Excuse the imagery - call it Climate Change, call it Revelations, one for the materially minded, one for the spiritual - split the difference. There is only one thing. Everything I am describing is entirely natural and scientific and expected from the moment the planes were grounded and the dust of our industry settled. How did we get here? Desire, fancy and whim fuelled by incinerating concentrated death energy in the form of the husk-shells of primordial semi monstrous beings.

How else did people think that would end?

THE DEMONIC LOGIC OF MAGICK

As you know by now Malkuth (2019) is divided into four quarters, one citrine/yellow, one olive/green, one black and one russet/red and we know in Lilith (2020) this ordering is reversed. During the film releases of 2019, movies seemed to be timed to ''land'' in the correct quarter - we have seen a lot of evidence for that happening in 2020 as well.  Looking closer at this for a moment we see that ''MIB International'' was released in the ''black quarter'' of 2019 and MIB 3 was released in the all black 2012 Year of Binah (Saturn).  What this suggests is that the Destruction Team was making an association between the black Sefira of Binah, and the black quarter/phase of Malkuth.  Following this daemonick qabalistick logick then we can suggest that the red phase was associated with Mars (southern fires at beginning of year), the black phase with Saturn (the pandemic), the green phase with Venus (within Hermetic Qabalah, Netzach, as Venus, is Green - the environment) and therefore that the Yellow Phase, starting in two weeks will be dominated by the Sun (harvest, food).

Here is an updated list for the reverse (psychological) alchemy of 2020: 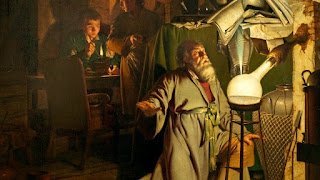 Spectres of ''Life on Venus'' complete the ''Little Green Men'' prediction for this phase, as well as bridging the phases via Phosphine and Sulfur, the ''Qabalistic Alchemy'' correspondences above and in Buttercups will help you navigate this. The Alchemist Discovering Phosphorous, a painting by Joseph Wright shows the moment where our eponymous alchemist, instead of producing gold, accidentally discovers Phosphorous instead - when first isolated the green glow from white phosphorous would persist for a while.  Our own ''space alchemists'' now tell us that the discovery of phosphine gas (PH3) traces on Venus indicates the possibility of life somewhere in the sulfuric atmosphere.  What they don't tell us, although I am 100% sure the Destruction Team is aware of this symbolism, is that both Venus and Phosphorous are associated with Lucifer; the Lightbringer.   Life on Venus via Phosphoric compounds translates ''Yetziratically'', if you will, into Life on Lucifer with Lucifer.

THE DARKENING AND THE SILENCING

Just like we had to draw focus to the Green, before we could ''de-Green'', so we have to draw focus to the Yellow, before we can ''de-Yellow''.  This Great De-Yellowing will be characterised by Darkness and Silence.  One aspect of Silencing crushes individual voices/spirits and individualism in general.  The achievement of ''herd mentality'', a clear Freduian slip from The King in Yellow there, and rolling back the process of individuation has been the whole point of this psychological alchemical enterprise as I have clearly explained over several posts, specifically those detailing the Black Phase or the Nigredo.  A herd mentality is necessary to manage the masses and survive climate upheaval - your unique and passionate voice of reason drowned out by one or another of the hysterical herds.  The second aspect of the Silencing is that information will be even more controlled during this phase, ramping the censorship up a few notches, dissenting voices suppressed, muzzled literally and figuratively, if not, then drowned in disinformation.

Similar to The Silencing, The Darkening should be taken entirely literally as the day grows shorter in the northern hemisphere and our exposure to the yellow light decreases.  With this Darkening Vitamin D levels will drop, in some countries like the UK they are already criminally low anyway, and this will increase the virulence and efficacy of lilifluenza.  Those of you who have been holding up Sweden as a model of herd immunity, after having been influenced by semi-eugenic right wing think tanks to do so, should keep a close eye on them as they enter their own Winter which based on how north they are is significantly more severe - remember they've had the light on their side this whole time.  I won't guarantee they will have a terrible winter as there are many other epidemiological factors in Sweden's favour - spread-out generally healthy and happy population, etc.  We can see the literal Darkening across the US right now as the smoke from the wildfires, blots out the Sun and decreases temperatures on the ground - the fact that attention is being drawn to the effect of clouds blocking out the Sun's heat on all news channels is a note to all those who know this ends in Climate Engineering and the reinstatement of Global Dimming, the Great Darkening. 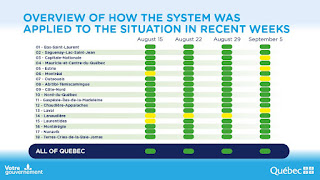 Various parts of the world are now oscillating between being considered a Green Zone with traceable limited viral transmission and a Yellow/Amber Zone which are areas that see sustained community transmission.  As the momentum builds for the inevitable second wave - which is building as we write and as most now accept, their wigwams of ''hope'' having collapsed - you will see Green Zones going Yellow/Amber en-masse but being held back from turning red, except in some cases, by increasingly draconian measures. 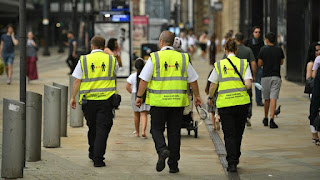 In the UK high-vis jacketed ''COVID marshals'' will police the regional lock-downs and break up happy parties - this spurs the speak-easy black-market element to this operation that I have been talking about for a while now to go even deeper underground.  The so-called Rule of Six, instituted by the UK government could potentially link back to what was said in the first paragraph - if we follow the Qabalistic associations of Tifereth to Yellow, the number is 6 and the planet is the Sun.  Amusingly the ''marshals'' shown above aren't socially distancing themselves but one rule for us and one for them was a key part of the cognitive dissonance used to attack logic/reason during this phase - logical, clear thinking being quite a high vibrational state, relatively speaking.  We have a situation where the UK government are putting social distancing into law and expecting people to stick to the rules or face fines while in the next breath breaking international law.  In France, our Gilets Jaunes, have reappeared to turn the streets of Paris yellow, and bring our Malkuth-Lilith revolution full circle. 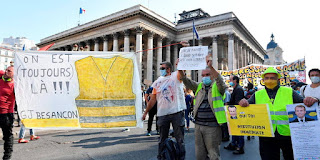 THE HUNKERING AND THE BUNKERING

So during the Hunkering Down (i.e. Darkening and Silencing), to quote a legendary Alchemist from the Destruction Team, they will continue to lay the foundations of the New World Order ''New Normal'' whilst we are all cooped up inside, warm and snugly, and tracked and traced via the internet of course.  During the last lock-down the 5G network, absolutely essential to our upcoming hell-purple ''astral plane'' experience of 2021, continued to be laid in the streets as it was considered to be ''essential work''.  Similarly the psychological foundations of the new normal, the ''newmal'' - communicating, teaching/learning and even travelling without ever leaving the confines of our cell - were laid in our mind.  For a large part of the population, mainly the extreme introverts, lock-down provided them with a reason to spurn the society that drains their energy and a return to such an environment is attractive for them.  As absurd as that seems to some of you, some people are already begging to return to their cell.  Eventually the extroverts will become enthusiastic about newmal as avatars meeting in ''head-space'' (or whatever it will end up being called) are able to use body-language in the way that they traditionally did in ''real-space''.  The weirdness of a doppel-gangering app - Replika (note the influencing colours at work here for 2021...) - and others like it, seen and unseen - combined with ''hollowed-out'' and exhausted people, human Qliphoth if you will, will be ''inhabited'' by this virtual self composed from typically the lowest (desires, anger, cowardice, apathy, etc) aspect of your personality, if they aren't already - these low states being the easiest to manipulate.  When trying to understand how this process of body-snatching is happening you have to understand it has been an insidious process of reward-punishment conditioning on social media which means the person literally turns into their doppelganger but as more turn, the process can become more overt and aggressive.  As ever, I retain the capacity to be surprised. 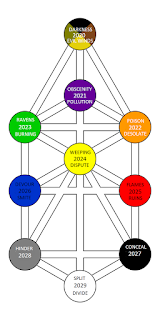