Metabolism VI - The Mask of the Genitals, the Vampyr and the Conflux 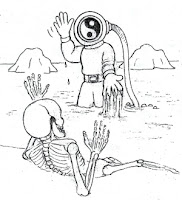 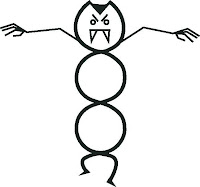 The Many Mannered Mind Man is almost entirely negative - one of the reasons is their association with the genitals.  Their primary concern, mostly unconcious, is with the survival of the species not the survival of the individual self - they don't think with their dicks, they think with their sperm and eggs!  Any positive attention moves them away from their formless ego to a more concrete form of ego (identified with Tifereth and the Inner Mind) and they will fairly immediatly take steps to do something which will cause them to recieve negative attention.  Think back to the section on Physiognomy - Genitals where we were talking about the propensity for characters high in testosterone to break boundaries.  In this instant then the negative attention seeking behaviour will almost certainly take the form of saying something inappropriate or breaking some kind of taboo - maybe even physical violence as a punch in the face is generally concieved as fairly negative.  Bear in mind also that since their natural character is at the bottom of this 'attention' Tree this kind of behaviour is perfectly natural and actually I would argue 'healthy' for them.

The mask of the Vampyr and the previous description of it seems rather nasty - well there are a lot of nasty images in this work and that's because I have tried to face humanity full on when I have been making my observations - I am not looking through rose-coloured spectacles.  The behaviour of high testosterone individuals in their relationship with other people is typically of the mask of the Vampyr.  In relationships, they can obsess, stalk, mesmerise  and be very sexually aggressive (male and female) and lets not forget that some people *like* this behaviour for whatever reason.  Success in individual relationships can lead to an attempt to form a herd of thralls that are in awe of the central Vampyr - typically massive success in this area is prevented by other characters.  The Vampyr is a symbol which is frankly not human - and not limited by the mores of human civilization - this ties in nicely with their love of breaking boundaries and going against the 'herd of humanity.'  Do not forget your own knowledge of the array of different kinds of vampyrs when it comes to spotting and managing this kind of behaviour in your own Conflux or others.  They can be urbane and sophisticated (remember shape-shifting/adaptability is a key ability of theirs) as much as they can be wild creatures of the night.

A distorted Many Mannered Mind Man in the form of an Immortal (the natural mask of the Jay and adrenaline) - a 'positively charged' Mind Man if you will can a be a *more* dangerous force, or seem so to the rest of humanity.  This distortion is typical of soldiers that go 'wrong'.  The Immortal is associated with the identity of the group and protecting that identity, and forming this kind of mask is the result of induction of patriotism and loyalty to fellow soldiers typical of the military - combine this with the high testosterone and violent instinct of a Many Mannered Mind Man and you have the various massacres and atrocities that come with war on an individual level.  If a Many Mannered Mind Man is seeking negative attention because their mask has been posiitvely distorted giving them that negative attention stops them from becoming this - which is worse.

*It is far more likely that positive attention on the Many Mannered Mind Man will change the mask from Vampyr to Immortal than Vampyr to Lover although it does happen if conditions are favourable - normally it requires lots of strong drugs - not alcohol.

The above information pertains to Yesod.
Posted by Blogos at 2:35 AM