"A sage once came to one of the meditators and asked that he be accepted into their society.

The other replied 'My son, blessed are you to God.  Your intentions are Good.  But tell me, have you attained stoicism or not?.

The meditator said 'If one man is praising you and another is insulting you, are the two equal in your eyes or not?'

The other said 'Go in peace my son.  You have not attained stoicism  You have not reached a level where your soul does not feel the honour of one who praises you, nor the degradation of one who insults you.  You are not prepared for your thoughts to be bound on high that you should come and meditate.  Go and increase the humbleness of your heart and learn to treat everything equally until you have become stoic.  Only then will you be able to meditate.'"  Isaac of Acco

The maintainence of poise then is not just a factor of internal self-control, learned from the restraints and the observances it is also a matter of maintaining that poise in a social environment where your activities are constantly being judged and responded to with negative and positive attention.

Many people, including respected magi in the blogosphere have made the mistake that maintaining stoicism equates to a repression of feeling and suggested that if you have no link to external desires and the satisfaction of them then there is no point in existing.  On the contrary stoicism results in the identification of the will, and with discipline the magnification of it.  Desire pulls one in various different directions throughout the day, by being stoic one increases ones sovereignity in the world.

Why would you want to be exposed to the careless off-hand comments of random individuals some of who may be hurting from their own problems and projecting their internal poison on to the outside world?  Stoicism does not mean you become armoured it actually means you identify the source of all of your emotional experience.  One lesson I teach in theatre is how to get angry technically.  Some actors believe that they need to think of some memory or experience they have had in their life and then link that to their performance.  I teach them to close their fist, curl their lips, tense their body and breathe shallow and fast.  Suddenly everyone in the class is furious.  I then tell them that if you can make yourself angry that easily, then you can make also make yourself happy as easily.  If I respond to criticism or praise it is my choice.  The emotional body is not repressed.  It is held.  This is poise and it is the manner of a King.

As one withdraws ever more into the mysteries of the self, it is true that you realise that the objects of the outside world are as shadows, but this is simply the first step.  When one has left the cave, and experienced the Sun, i.e. pure consciousness and will, then when one returns to the cave those once-husks now glow with the colour of the Mind, not with the shadow of the physical.  Manifestation is not drained of meaning by the pursuit of Stoicism, it is vivified by it. 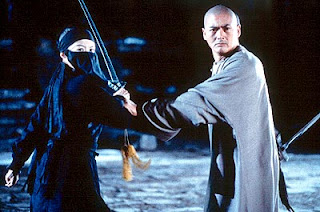 "Real sharpness comes without effort. No growth without assistance. No action without reaction. No desire without restraint. Now give yourself up and find yourself again. There is a lesson for you. You need practice. I can teach you to fight with the Green Destiny, but first you must learn to hold it in stillness." Li, Crouching Tiger, Hidden Dragon
Posted by Blogos at 10:04 AM