I've been working on speeding up the journey to enlightenment, and I think I have it down to 45 mins + some homework. 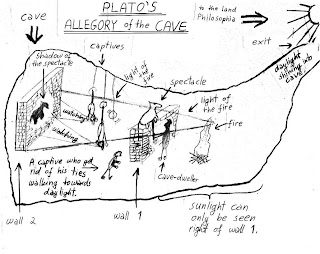 We then move on to the structure of the eye and how that relates to their 'experience of the moment'.

Then they are told that they are delusional, just like the people in the cave.  Their consciousness is so effective at creating an image of the world that their eyes experience inside their mind that they mistake their consciousness of percepetion for the world itself.  Their whole life they have been living a lie where they think they look through their eyes at the world rather than at their visual perception (this applies to all the other senses) from someone in their mind.

A practical optional lesson is to take them into a dark room dazzle them with a torch and then return to the darkness.  This creates a kind of retinal burn, a coloured blob on the vision that persists in the darkness.  It is easy to establish here the existence of mental light and thence to all perception being composed of 'mental light'.  There are other interesting learning extensions here*.

This piece of information is absolutely essential in transforming oneself from the bare Feelix, a (delusional) physical object in an apparently physical world into Feelix in his circles of consciousness, a mental object in a mental world.

Now we know that we are in the cave, I posit the question what then is the route out of the cave (informing them that the sun outside the cave referred to is not the physical sun but a metaphor) implied by Sokrates in his story?  Where does one actually go when one 'leaves the cave'?  How does one leave 'consciousness'?﻿  Sokrates is not talking about a deeper understanding of the physical world in leaving the cave, but a deeper understanding of the mental world. 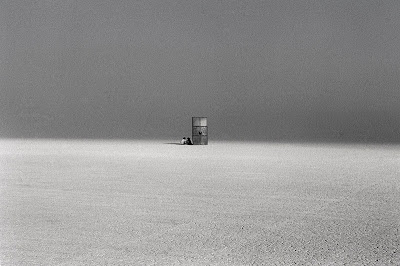 Well before teaching lucid dreaming and astral projection, I recount an adventure of my own in this regard.  I had been struggling with the astral body of light for a while before moving to Prague.  I had been getting severe sleep paralysis on and off for about six years, and sometimes in the depths of those hells only prayer to Isis, Mary, mummy (!) would get me out.  When I moved to Prague I was living on my own for about nine months and the attacks became even more severe.  One night, as I was lying half-paralysed and electrocuted in bed, I managed to crawl, using my one working arm towards the door of my bedroom, and reaching it found it locked.  This can't be true I told myself, in the weird limbo hologram I was in, I wouldn't have locked myself in my own room.  Gaining strength from this truth I slowly forced the door open with great resistance, as if someone else was holding it shut on the other side.  When I finally wrenched it open I stared out across a vast purplish landscape, replete with mountains, vallys and flying things.

We then look at two methods for exploring the larger consciousness which I referred to as the Trick and the Method.  The Trick is essentially you do not roll over when you want to as you lie in bed, you have to trick your body into it thinking that 'you' are asleep so you get sleep paralysis and from there can move into lucid dreaming. The Method uses closed eye visions - the little squiggles and blobs that start appearing in your vision after several minutes of static noise.  The Method involves deep breathing, and concentration on the squiggles and blobs until they begin to morph, or you go (pull yourself) into them (if one is lying flat on one's back in death-pose yoga then going into them, actually is going 'up' - this is your classic silver cord astral projection).  Important notes here are to keep the eyes forward, if they drop in the socket its typically because one is listening to their own egoic thoughts or worrying about physical comfort (if you want to increase the visual aspect of the experience actually hold your eyes up in the socket) and maintain the breathing.  The results are a kind of weirdly intelligent tesselation, emotional colour fields, and then ultimately crystal clear visions (almost more real than your normal waking life) full of beings who will talk to you.  My own opinion, on this world outside the cave, is that it is a place we all share rather than our own space (we have our own dream space mind, not all dreams take place here) - in the cellular model I have been building this place is the 'blood' of the larger mind, that feeds all the individual cells with the stuff of consciousness namely Time.

The immediate success rate of this lesson is very high, say 90%.  Largely the students understand it.  Many of them already have enough shared experience like to know where it is going (after the cave at least).  Maintaining the state of contemplation of consciousness, i.e. the truth of your experience is difficult (and perhaps dangerous...) and I believe that 90% of students fall back into the delusional state of being a phsyical object looking 'through' its eyes at the world.  The students who, in my opinion are likely to maintain the state for longer and/or at intervals through the rest of their life were the ones who were already prone to lucid dreaming (some actually slept in death-pose yoga and lucidly dreamt virtually every night) and therefore the most important part of this lesson is an authority figure telling you that this experience (and talent) is valuable and that you are not alone.  The exploration of one's own consciousness is both wildly interesting and hugely important in the development of the whole being.****  I do believe that this state could be induced in the wider community were it actually part of the curriculum, I believe the recent changes in the ToK syllabus to include 'religious and indigenous' areas of knowledge are an opportunity to explore the 'knowledge' of mystical states and experiences, the akhashic record, the spirit worlds of dreams experienced by 'primitive' tribes, etc.   There is a 'spiritual' thread that is permitted in education, but its not widely or wisely used by most schools - it is however the only bridge that can close the gulf between knowledge and wisdom that our Angloamerican obsession with materialism and the natural sciences has opened.

Approaching it from another angle would be to argue that this is not safe - and indeed students have experienced and reported the weirdness, disquiet and often pain that goes with the Trick and the Method (although all agreedit was fascinating and 'worth it') - yet if it is 'health and safety' that is being used to limit students exploring their own consciousness the counter-argument would be, well you let them, indeed force them, to play rugby so how is this lesson in being a physical object in a physical world any more dangerous than learning to become a mental object in a mental world?


*If one is clear that the universal substrate (the one thing) is thought/mind that one can do awesome mind-blowing things with the fragments we have of Parmenides' 'On Nature'.
**Zeir Anpin, the first sphere is associated with Tifereth in the 'horizontal' Tree of Life.
***Arikh Anpin, the fourth sphere and beyond is associated with Keter in the 'horizontal' Tree of Life.
****It is also something that again we have in common - we all know that feeling of dropping suddenly whilst getting to sleep, we've all seen the 'blobs and squiggles'.  Its so refreshing to talk about the stuff of the life-world that makes us the same rather than that which makes us different.
﻿