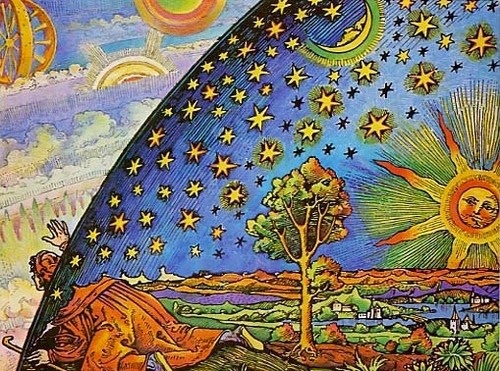 How do I get into/onto the Astral Plane*?

All your experience happens in your consciousness.  You never percieve the world directly but only through your senses.  You only ever interact with your ''mental impression'' of things.  When you are in the darkness at night you will see that the darkness is not actually ''black'' persay but made up of coloured pixels that are flickering.  These are retinal flares from the cells on the back of your eye, a place that you look at represented on your visual cortex from somewhere else inside your mind. You are going to use that ''consciousness of perception'' to shift your perception.

Sometime during the above process you will actually ''enter the light'' and on the other side will be a plane full of bizarre landscapes and strange creatures.  One/some of these creatures will often investigate you and ''ask you for your papers'' it is at this point that you must give passwords that indicate that you should be allowed to be there (God-names, etc).  If you cannot provide the password they will ''kick you off'' the Astral.

How do I distinguish the Astral Plane from just my vivid imagination?

The reason people see faces in clouds and rocks is because the human brain is exremely good at recognising these things.  The same thing happens when you are observing the dots and blobs and they transform into snakes, etc - our brain is attempting to resolve these ''shapes'' into recognisable things.  So how do you know that the things one sees are astral and not simply imagined?

Its a difficult question because all things must by necessity be experienced in your mind - how for instance do you know the physical is real, really?  My own personal distinction is when the experience is extremely vivid (often more vivid than ''waking'' perception), contains entities that have ''their own voice'' and also when you are given information that you otherwise couldn't possibly know.   Is this experience all in your mind and the creatures that you experience are created from your subconscious?  It certainly doesn't appear this way although I understand the question I would urge you to seek results and then discuss - after all the whole universe could be contained in a Mind which your Mind is a part of.

Why am I going there?

As a magician you should be developing an astral body - that is a means in which you can move around on the astral plane.  Only by experiencing it and by attempting travel will this body develop. You are going there primarily to exercise this nascent musculature.  Once developed this Astral Body can be used for lots of terrestrial work as well.

There are also specific places on the Astral Plane, for instance the elemental realms.  By accessing these realms (through tattwas, etc) you can entreat the residing entities to boost your efficacy when working with that element.  There has been a lot of work and discussion regarding how to treat spirits when you summon them to your home, think of this as making a house-call to them.

The Astral Plane is split into different subplanes according to the planets, thus Yetzirah consists of a series of planes with the ultimate plane being Saturnian .  Each one of these planetary planes is guarded by progressively more powerful entities.  The plane described in the above post is mainly the upper Earth atmosphere to the Lunar Plane.  If you are experiencing blinding light you have probably astrally projected to Sol.

Why am I writing this?

I am deeply troubled by the lack of knowledge and/or interest in this topic.  In a recent discussion regarding education and magic very few of the people who responded claimed any more than the status of ''dabbler'' and by all accounts minor dabblers at that.  Whether or not other figures in the community share my opinion as far as I can tell the WMT is running on fumes (at least visibly).  The focus in topics in my immediate vicinity seem to be the socio-cultural anthropology of magic, geopolitical speculations, various titbits of hedge magic, assorted dogma about sash design in out-dated orders, empty ''go girl!'' rhetoric and 101 style terrestrial magic (summoning Earthly rewards primarily).  Well-respected figures of ''the community'' are apparently just learning to meditate which I find more than a little shocking and it necessarily leads me to wonder about other figures.

Alongside this people I thought were my peers have not developed an Astral body or their magickal memory.  They have not properly studied the QBL (yet often dismiss it).  They have not explored their consciousness and how it works.  They have not completed devotion rituals but treat God-spirits like buttons they can press for candy.  I had mistakenly believed that these skills were core disciplines in the WMT and it makes me wonder when you strip them away what *are* you left with? A tradition perhaps, but very short on magic and/or mystery.

*Yetzirah.
**What defense mechanism - depending on your P.O.V. you could consider it a way in which your higher mind stops your lower mind from accessing all your powers (as your lower mind cannot be trusted) you can see it as part of the ''psychic interdict'' maintained on the Earth by other worldy creatures or as both...
Posted by Blogos at 4:15 AM