Pessoa, Vishnu and the Multiplicity of the Self


Fernando Pessoa, his mind full of heteronyms, studying his reflection in the mirror thought they think therefore they are.  In asking after the cause for the condition of his soul, he would speechlessly point to a clothes hanger, a mirror and a pen.  In one of the Disquiet vignettes he spoke of ''amming the self''. 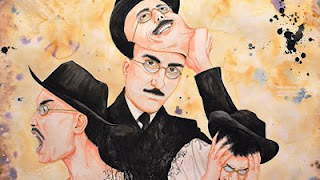 I share common ground with Fernando Pessoa - he approached the subject of the multiplicity of the self through his poetic heteronyms and literary voices and I approach it through knowledge of hormones, of proteins, and of genes.  My heteronyms are physiological and physiognomical - the glands of my own body anthropomorphised, communicated with in distinct voices, and projected on to the world as the physiognomical archetypes, revealing which invididuals are dominated by which god or gland and subsequently entering dialogue with them.

These dominant glands manifest certain types of identity for instance if dominated by the pituitary and pineal glands one tends to think about themselves in the third person - they objectify themselves continuously.  Domination by the pancreas, the thymus and the thyroid produces individuals with a more concrete identity and those that think in terms of me, I, etc*.  Finally those dominated by the adrenals and genitals are those with the least concrete idea of themselves - they will experience emotions, thoughts, etc in a more primal way without automatically attaching too strong a me or I to them.

A good benchmark to calibrate this system for your own understanding is to examine the influence of testosterone which generally produces aggression, impulsiveness, paraphilias and a decidedly animal nature - my representation of this is the Many Mannered Mind Man a man with a testicle for a head whose identity is in constant flux.  Contrast this with the pituitary Ignorant Genius - the kindly, balding giant more at home in creating and controlling characters than in manifesting their own - our writers and directors.


In discovering the multiplicity of ourselves we have to understand that although our personality typically ends up being dominated by one of these glandular gods we contain them all within ourselves - but we don't have to go on an inner journey to discover our multi-armed, multi-headed selves we can find them externally, the people around us the other cells of that divine physiology - working together like a tissue to complete our metabolism.

In Kabbalah we speak of Tikkun ha Olam - the rectification of the worlds - the idea being that in the Shevirat Ha Kelim, the Shattering of the Vessels, the world became broken and overwhelmed by evil. The Ari used the partzufim (personifications, countenances) in order to complete this reparation - for while the kelim could not contain the light and so shattered, the partzufim, by being able to enter dialogue with each other, could both give and recieve the light**.   We could speak of our task on Earth being Tikkun ha Partzuf, the repair of the face.