The Tree of Life - The Brickwork of Sapphire

They saw a vision of the G-d of Israel and under His feet was like the brickwork of sapphire and like the essence of the heavens for its purity.


In The Tree of Depths I discuss the problems with the use of spheres in the Tree of Life - they automatically limit the mind to three dimensions when the Tree is trying to portray five dimensions and they also help people to unnecessarily conflate the planets with the Sefirot which goes on to cause a whole chain of logical contradictions in their thinking.  That the word Sefirah sounds like Sphere doesn't help but we know the word actually relates to counting, text and communication - i.e. to meaning.  Gershom Scholem in Kabbalah also points out the similarity between the word Sefirot and the word Sappirot (or Sapphires). As Io discusses in his post on Crossroads by removing the spheres from the tree and just looking at the Sefirot as points, or vertices where the lines meet, you see the appearance of diamonds/rhombuses or the brickwork of Sapphire.

But mercy is above this sceptred sway,
It is enthroned in the hearts of kings,
It is an attribute of God himself,
And earthly power doth then show likest God's
When Mercy seasons Justice.


William Shakespeare, The Merchant of Venice


In the early phases of the universe you had a chaos of unconnected points or nekudim, the eventual connections between these points are the paths, the brickwork, conterminous with the letters of foundation. By differing arrangements of these letters the entire universe is constructed - like atoms or genetic code.  But the universe struggled to contain the light that the thoughtful infinity imbued it with so many of the Sefirot shattered and each of the points, or divine sparks, nitzutzot, sank into matter, wrapping themselves ever more completely in husks and shells, they sank into the Klippot, they sank into the Spheres... 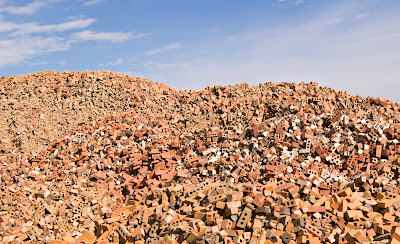 How do we strip back these accumulated layers of confused meaning?  How do we de-spherify our thinking?  We can use advanced mathematics to meditate on toroids and Calabai-Yau manifolds as string theorists do; we can replace spheres with vertices and crossroads, help us understand interconnections/relationships; we can return to the brickwork.  The Tree shattered because the ideas of the Sefirot were separate and did not contain each other within each other - mercy did not season justice*.  But the Sefirot of the Supernal Triad, the worlds of Atziluth and Briah were not shattered and in those worlds we see the naked points and their connections themselves, as they were meant to be.


The ultimate problem is that ''spheres'' or rather circles** remain incredibly useful as text boxes after all there needs to be some way of writing the name of each Sefirah and pertinent information on the diagram!!!  We need to constantly remind ourselves, and those we mentor, that the sphere on the diagram is a blown up, zoomed in vertex, and the essence of that vertex is a singularity, not a sphere, otherwise we are, and have been, in great danger of mistaking the eggshell for our metaphysical baby chicken - and building a Tree of Shells as opposed to a Tree of Life.

*The roots of the shattering were in din, or ''unseasoned judgement''.
**In Lurianic Kabbalah, circles or iggulim are used to describe the pre-shattering arrangement of the Sefirot that did not work to contain the light - this is an explicit association between Klippot and our somewhat misguided tradition of sphereoth.
Posted by Blogos at 1:54 AM