I started the Hermetic Lessons blog to attempt to spread the material on the Metabolism of Time into the wider consciousness of the Western Mystery Tradition as well as providing opinions and insights on the practical application of magick in general.  Whilst being a published author gives legitimacy and to some extent a small (?) living (?) I don't need the money and I don't think small prints of books are the best way of disseminating ideas although I do think they can be beautiful objects.  One of the potential problems with ''authors'' and their effect on the community as I see it is the temptation to sit on ideas or research until they become books reducing the immediacy and potential range of their impact.  How many ideas died this way before they even became books?

Since I started the blogosphere has mainly died off (with some notable exceptions) in favour of magicians dicking about on facebook/tumblr or engaging in futile political rants because a) that is a damn sight easier than having to write a blogpost and b) it generates more social traffic these days.  I prefer blogging to such social media chit chat and posturing because of what it does to the relationship I have with my ideas.  I am sure there are still a few bloggers who can resonate with this. Anyway there has been a renewed interest in the blog over the last couple of months and partially I think it is to do with the lack of geunine content being produced elsewhere (again with notable exceptions).  I wish it wasn't this way but it kind of is.

I made a post about Cellular Consciousness a few days ago which has a set of links that can guide you to what I think are the core discoveries of the Blogos and its these ideas that I am mainly trying to spread around so please help with that if you can.  I understand there is an intellectual gap when it comes to knowledge of the sciences in the occult community but have a go at wrapping your head around the ideas as they will enrich your perspective on your own innner being and how it relates to this model of consciousness.  For people who are struggling to make headway in the WMT at all or are realising that ''material'' desire fulfilment might not be the be all and end all of being involved in the mysteries I just want to give a few points of advice, I think these few things saved me a great deal of wasted time getting lost in the labyrinth.

1. Raja Yoga, Dzogchen or something similar - this should form part of your practice as early as possible.  The idea of restraining oneself from and observing other practises i.e. vegetarianism is perfect training for the will and the way in which the system then applies that will to more challenging states - asanas, pranayamas, pratayharas - finally culminating in an apprehension of the true nature of mind is vital for rapid progress.

2. Pulling  - When trying to affect the physical world around you (and I don't mean levitating stuff) direct your psychic influence through pulling rather than pushing.  Holding your fingers to your temple and attempting to push stuff about, as it is portrayed in many comic books and other fiction,  will not work at all because that is the wrong part of your brain - the frontal cortex is the seat of the will and is really good at stopping you doing things but not that useful for direct influence.  You need to use the back of your brain and the ''force'' (whatever it is) is directed into yourself (drawn in to the pineal and cerebellum) as opposed to pushed out (from the pineal).

3. Astral Body -  As discussed repeatedly throughout the Hermetic Lessons your true nature is mental, you inhabit a mental universe which is made of your sensations, perceptions, thoughts and concepts, which is in itself buried somewhere in the rest of your mind which may or not actually be in a physical body in a physical universe.  One of the easy mistakes to make when astrally projecting is that a lot of advice sites tell you to imagine your astral body rising out of your body and what this tends to do is shift your imaginary perspective to a third point where you are trying to see that body rise out of your physical body.  Lots of time can be wasted here.  Lie on your back and then pull yourself up on to the astral plane you are already in your astral body right now you don't need to imagine anything.

4. Jewish Kabbalah.  I was lucky in that I only poured a few years into the deeply flawed and logically inconsistent systems of so-called ''Hermetic Qabalah'' that the Western Mystery Tradition largely relies upon before a small band of plucky Kabbalistic mentors saved me from this massive (mostly) time waste.  It should be a no-brainer.   If you are going to study ''QBL'' then include a great deal of Jewish sources from the get go - I started with Kaplan, Idel, Scholem and Hallamish.  If you don't do this then you are perversely maintaining a kind of weird ignorance about one of the most important foundations of what you do and you need to have a good long conversation with yourself about why you are doing that.  Its bizarre and illogical so sort it out.

5. Purity.  I dimissed the notion of religious cleanliness, virginity, innoncence, etc in the WMT for a long time as unnecessary historical baggage but I see that a clear heart is fundamental to success in these endeavours and that I recieved this training from the East.  I am not talking here about Faustian pacts with spirits to get you all that bling and worldy adventure that you desire I am talking about accessing higher realms in astral form.  ''You'' are ''your'' own worst enemy when it comes to keeping ''you'' mired in 3d delusional reality and the egoic babble of anxiety, pride, malice etc will block all entry to higher worlds.  Bathing, wearing white, anything that establishes the ideas of cleanliness, openness and innoncence is practically beneficent but most importantly you have to quell that egoic noise as much as possible.  I can blame most of my failure on this and I am sure you can too. 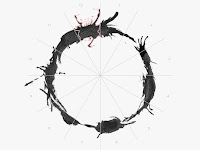 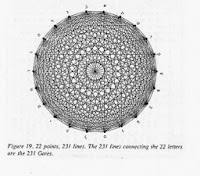 Anyway a few things to think about and have a Merry Christmas everyone!  If you do pledge to write more in the New Year - stick to your promise this time, eh?  The next month should have given everyone who is anyone time to see the Arrival and we'll be continuing with why the two images above are closer than you think when it comes to ''exploring'' non-linear time and its relationship with language.