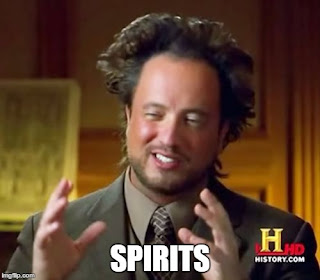 The first questions that Dr Faustus asked Mephistophilis were about his true nature and that of the other damned spirits.  The conclusion of the scene comes when he asks - if spirits are damned/trapped in hell then how can Mephistophilis even be conjured to Earth? - whereupon he is told, Why Faustus, this is hell, nor am I out of it.


Its very tricky for a relative outsider such as myself to really gauge whether questions like this have been satisfactorily answered by occult practitioners, or whether anyone has ever really dared to ask them - where do you ''live'', where do you ''come from'', how is it possible that you are here, etc.  The concerns of most so-called sorcerers seem to be about the ''physical'' result of the conjuring i.e. what they are going to get - the cute broad, two homes, becoming Head of Production, 15 million dollars - whatever the ''material'' need/desire was that initiated the conjuring in the first place as opposed to deeper knowledge of the universe and its spiritual workings. When practitioners are pressed for answers, and don't try to evade, either the answers become very woolly or needlessly complicated. Even our more experienced, well spoken practitioners seem to descend into references to different types of plane(s) with lists of cool sounding names (etheric plane, spiritual plane, astral plane, informational plane, noetic plane, logoic plane, ad nauseam) and very little understanding.

Presentism suggests that if the spirit is identified as once living then it is either trapped in the present somehow and carried forward with us from this moment to the next, or in the case of spirits considered non-living (hypercosmic gods, various demons) somehow contacted in/from some other realm/dimension (beyond the hazy veil of whatever plane - see above). Eternalism though provides a lot of explanatory force - entities, including us, are in fact communicating across or through time. This model seems to work really well and I have been applying it to entities encountered through practical work - classifying whether they are from the past or the future. For example with Eternalism a classic repeating ''ghost'' is not trapped in the present, those events occured in the past which still exists/is happening and became entangled with various different points in the timeline.  You can stretch this to say that all spirits are ''humans'' at different points in the timeline.

The problems I encounter with this line of thinking are the spirits (and ''aliens'') which are described as monstrous/non-humanoid and so-called egregores although they are not unsolvable.  As I have mentioned before the Mothman and Mantis like entities I have encountered could easily have been wearing some kind of suit, and this suit may be a necessary feature of whatever means they are using to travel/communicate through space/time - in that sense they could be post-human ''spirits'' from the future.  Similarly reptilian creatures or elementals could be pre-human entities from the past - our common ancestry in DNA weaving us together through time. Egregores would be a projection of the future, as well - so if you are involved with a successful group project that becomes more successful and you communicate with the egregore you are in fact communicating with your own selves in the future and/or viceversa.  A form of mass entanglement if you like.  The same could work with the notion of Gods as real people vs egregore/thought form - in one type of work you are entangling with the actual person the God was originally derived from in another type of work you are mass entangling with the cult itself.  When we are trying to make judgements about the relative truth of these statements and whether they are in line with observations we also have to factor in anything we have imagined on top of the real image/sense effects and the actual lensing/distorting effect of time-travel itself. 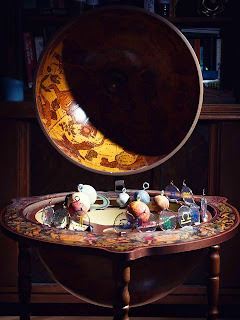 I have explored this practically when living at Edward Kelley's Tower.  The Time Phone was going to be used to attempt to communicate with the past and change what had happened by providing Edward Kelley with information that would have led him to be able to avoid some of the incidents that led to his death.  This experiment was never tried because of the untimely death of Vincent Bridges himself.  I personally tried numerous magickal experiments with the phone before that however.  Theoretically the ''phone'' can be used to build a link/connection to the future or the past and then serves as a portal (only for information) between these two positions.  I first discovered this idea when I realised that many of the so-called spooks and spectres of the tower felt like they were alive and were in fact co-locating with us as opposed to something in the past that had been carried forward, I also became increasingly aware of Kelley's (and company) attempts to communicate with the future from his position in the past through observation of these echoes and overlaps.

I am not an Enochian practitioner but one of the experiments involved sending the Calls* back to Kelley, from the future.  After establishing the link by opening the phone, I got the strange sensation that I had to disrobe.  As I lay there naked next to the tower, I was keeping my mind very still and my body perfectly relaxed and as the music grew I observed a tiny white square open in space/time/my mind(?), which opened out into a softly glowing white rectangle about the size of an envelope - this stayed there for about 5 mins as I watched it.  This was the only discernable effect other than a weird blend of tranquility and disquiet.  About three hours later in the evening, there were a series of extreme electrical effects with the power in the tower going crazy, some objects staying on during these oscillations, others cutting off, things powering down and then suddenly roaring back to life with a weird zing sound alongside other lesser but noticeable poltergeist activity, small objects moving around, other strange noises - I was pretty terrified.  There were other experiments with exchanging information in this way but they will be explored in subsequent posts. 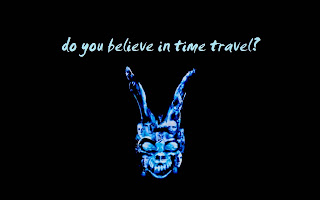 It seems to me then that there is no dichotomy between spirit and man and that we can dispense with other ''spiritual'' realms entirely.  We are all spirits or, if you want to flirt with Mephistophilis' darker perception, that we are all damned spirits in hell right now. From the perspective of an entity in the future you would seem, perhaps, to be a ''ghost''; similarly, an entity in the past could be ''conjuring'' you from the future.  How would you know you have been conjured? Where the person in the past may feel the normal effects of conjuring a spirit (they would be some communication, manifestation, etc) from your perspective you may just enter a trance or it could all take place during a dream.  Who is conjuring who? Following this line I would expect in fact that two entangled ''magicians'' where one thinks the other one is a ''spirit'' are likely to both be engaged in some kind of magickal practice at the time, especially in the case of the more legendary experiences.  It is entirely possible that my experiences in the Tower occurred because I was conjured - rather than my own volition sending the Calls back to Kelley, Edward Kelley conjured me.


*These are samples but an entire set of calls was recorded by Vincent and his group and used during that experiment.

Posted by Blogos at 2:16 AM No comments: