Although we have been trained to believe that thoughts are trapped in our brains because we believe ourselves to be the physical body we appear to be, as explained in Empty-headed our [sensation of our] head is in fact empty.   In truth our entire [sensation of our] body is created by the mind and the head is in itself empty; our thoughts cloud about the face and occupy the seemingly physical objects in the world around us and beyond as well as all over our mental homunculus of our self. 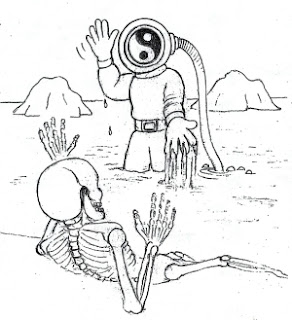 In One Hundred and One Pieces of Mind Man Trivia we encountered the testicle-headed or ovary-headed personification of Yesod known as the Many Mannered Mind Man.  In the ''physiognomy'' laid out in the Hermetic Lessons we know that people with high testosterone are more likely to act in certain ways than others - for instance aggressive tendencies, lack of restraint, and paraphilias are much more common - and in describing their behaviour we could say they are thinking [and acting] with their testicles.  Similarly the other personifications are related to other glands and groups of hormones that produce physical changes in the body alongside altering the mood of the various individuals who express them in lower or higher concentrations than ''normal'' - those personifications could be said to be thinking with these other glands.

In confronting our bias towards facial-cranial centrism in this way we have to ask where is our head actually at? When we are talking to other people we generally talk to their faces but the whole body of the person you are talking to is a construction of their mind - why not talk to their feet, their belly, their nipples or their butt - as if it were their face?  What if that person is thinking with their testicles shouldn't you be directing your attention and intention that way as if their testicles are their head? Even deeper than this every nucleus of every cell is in fact a ''centre'' of mind - talk to the whole being as if it were all head and all mind, imagine your own body as all mind, that is, after all, what it is.

My ''natural grade'' is the kidney (particularly the adrenal cortex), I am ''kidney headed'' and therefore, fundamentally, a cleaner. Many doctors, assassins and even actors are cleaners (that's why we say ''polish'' the work, and we provide catharsis, a kind of purging of blood-spirits for the audience) - a toilet cleaner or over zealous housekeeper is effectively working in preventative medicine!  The more kidney headed I let myself become the more ''OCD'' I get, the more focused I am on polishing the form and the more capable I am of multi-tasking - if one is disciplined these special powers of the cleaner can be applied in a great variety of areas.

Over the last few weeks, however, I have been actively investigating moving my ''head'' or centre into other parts of my being and re-imagining my own head (and others') as if it were, say, a tail.  This can be quite amusing as different thoughts/emotions/responses are immediatly generated by this experiment.  Allow your ''head'' to drift into the back of your knees, live as if the back of your knees were your head for a few hours or a whole day, more importantly diminish the role of the head/face give them the same level of consideration you would normally give to your heel, or your tailbone.
Posted by Blogos at 2:53 AM