Little Miss Muffett unquestionably represents Malkah; for she is unmarried. She is seated upon a "tuffet"; id est, she is the unregenerate soul upon Tophet, the pit of hell. And she eats curds and whey, that is, not the pure milk of the mother, but milk which has undergone decomposition.
But who is the spider? Verily herein is a venerable arcanum connoted! Like all insects, the spider represents a demon. But why a spider? Who is this spider "who taketh hold with her hands, and is in King's Palaces"? The name of this spider is Death. It is the fear of death which first makes the soul aware of its forlorn condition. It would be interesting if tradition had preserved for us Miss Muffett's subsequent adventures.


In the Interlude of the description of the magical weapons in Book 4, Aleister Crowley takes a series of nursery rhymes and subjects them to a mixed esoteric analysis.  Like the rest of the finest Crowleyana, this segment seems to both explore and simultaneously mock the idea of a universal mythical symbolism that has been passed down to us over millenia.  As I was writing ''and Donkey Kong represents his lower animal impulses'' in my analysis of Pixels, I couldn't help thinking of these passages and reflect on what is the purpose of what I am writing [am I taking the piss out of you, out of myself?] and what is the purpose of what they are doing, if ''they'' are doing anything at all.

Before we begin our [self] criticism lets acknowledge:


Before I started developing this overarching [conspiracy?] theory after reading Chris Knowles' 2017 observations [and, importantly, during watching Twin Peaks:The Return], I would analyse films like American Beauty in this way anyway although I would focus more on ''Jungian'' approaches to Qabalah as opposed to the direct and overt use of colour, number and standardised symbols. As I have been exploring this last decade of films though it feels different, its clearly not like I am teasing out the imaginative use of occult symbols that have been subtly embedded in works by artists [or indeed the universe through them], I am just pointing to the bullet points of the list and then to the film, nearly in the same linear sequence.  That is why if the ''film-makers'' are aware of what they are doing, which seems likely, then it makes sense that Pathworking is the essential principle behind this change in practice and the increase in blatancy is necessary to achieving the goals of that pathworking. We are no longer using Qabalah to see more deeply into art, we are just seeing Qabalah. The map has become the territory.

Pathworking is explained in a number of Golden Dawn texts [and spin-offs like Modern Magick] as a process of guided meditation where one opens a path with the specific symbol set of the Sefira you are ''in'' and then ''walks'' along the path confronting and meditating upon those symbols and drawing spiritual conclusions.  If you read those instructions it all seems very contrived; you enter into these situations and force your mind to see the symbols you are supposed to see according to the Golden Dawn as opposed to being more open about it.  If the films are indeed pathworking exercises of a form, i.e. direct confrontation with the contrived symbol set, then whatever set of ''paths'' you have walked in the last decade i.e. whatever movies from the main studios you have watched, you have been exposed to a guided meditation - down the Tree of Life - and are now in the Endgame of 2019, the Year of Malkuth. 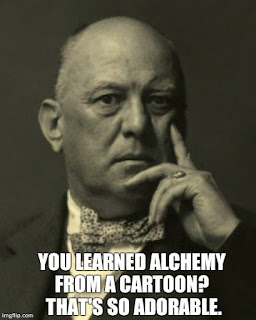 Like the Interlude, there is something of a Crowleyan arrogance and cruel humour behind these analyses as well, I feel like after pursuing the keys of the universe in esoteric cellular genetics, in Sefer Yetzirah, in exploring time travel in Edward Kelley's Tower that there is something hopelessly mediocre about describing how ''cultists'' may or may not be ''painting by the numbers'' so that people far less well read on this topic might ''get it''.  As Lo Pan says in Big Trouble in Little China: ''Mr Burton, you were not brought to this world in order to 'get it'.''  That self-doubt doesn't mean I will stop doing this but I need to be aware of this element of internal pride and hubris that wants me to believe I am stooping to conquer and to remind myself of my own failures and shortcomings and realise that any cruel laughter hiding in my heart is directed at myself as much as anyone else.  For all his sadistic personality, I think that applied to Crowley as well.   On a positive note, there is also a part of me that thinks that these analyses could be a) good study aids for someone wanting to learn about this esoteric sub-culture b) a way of organising movies from certain studios as pathworkings up the tree and c) a good revision session of Qabalistic primers for myself, bearing in mind the details of the system that I use are highly rectified in comparison to G.D. Hermetic Qabalah and its spin-offs.

The above probably applies to the group of people working on this project as well, assuming such a project exists and its not simply an hallucination or continuing derangement of my own senses and reason.  I imagine, as artists, that many of them might feel like they are stooping in using colour and symbolism in such an overt blatant way.  I mean I enjoyed the OAII as much as the next Occultnik but it was more than a little bit, I don't know... vulgar?  That said many of them are probably just working on a commission and like scientists of the military industrial complex are so compartmentalised that they lack any knowledge of the big picture.  In my opinion some of the blatancy is also required because of the general decline in intelligence and critical thinking, the inability of the audience to even remotely look beyond the obvious and not interpret things literally and without context, which leads me to my final point.

As I consider esoteric elite projects and in coming to terms with my own elitist tendencies I also have to reflect on what has become of the ''public'' Western Mystery Tradition in its embrace of populism instead.  Although a lot of my peers might bemoan political populism when it comes to Trumpism they completely fell foul of it themselves during the rise of social media popularity contests which have produced increasingly empty, banal and mediocre posts, the rise of ''chat'', a dearth of meaningful thought-provoking conversation and the continuing descent into the dumb. Even those who consider themselves anti-authority outsiders got Skinner conditioned by social media into playing along and are now some of the worst offenders, in my most humble opinion.  Alongside this in the esoteric populists' anti-authority rejection of their own ''elite'' came this bizarre desire to reinvent the wheel before they could comfortably drive a car which seems to have effectively paralysed the culture for nigh on a decade now.  There is much self-congratulation on progress, I see no evidence of that whatsoever. So, for the record, while I may call myself out on my elitist tendencies, God forbid I become a populist.  I will only stoop so far.

This is so simple as hardly to require explanation. Humpty Dumpty is of course the Egg of Spirit, and the wall is the Abyss--his "fall" is therefore the descent of spirit into matter; and it is only too painfully familiar to us that all the king's horses and all his men cannot restore us to the height.