2021 - The Year of Gamaliel, The Rocky Horror Picture Show

It's astounding,
Time is fleeting,
Madness takes it toll,
But listen closely,
Not for very much longer,
I've got to keep control
I remember doing the Time Warp
Drinking those moments
When the blackness would hit me
And the void would be calling,
Let's do the Time Warp again

So 2021 is shaping up to be a live action Rocky Horror Picture Show with your average pedestrian being Brad and Janet.  With the cryptic synch-ery of Science Fiction Double Feature already explored, the ''cannibal deviancy'', etc on public display and the madness definitely having taken its toll, it now seems entirely plausible to expect them to do the whole show.

Just like with Clash of the Titans (1981) last year perhaps one takeaway is the idea that maybe each year will be structured according to one of these ''classic'' type movies as opposed to pure myth persay.  These movies are likely to be famous and influential upon the Destruction Team.  If I was going to attempt to do this I would have to either a) split the year between the songs in one main narrative b) run the songs simultaneously on loop and move the audience through them or c) kind of both.

I experienced this problem at the beginning of 2019 trying to understand how they were going to work with the four quarter structure of Malkuth, they could either do it in phases or simultaneously.  Based on what I understand at the moment, it seems likely that they will (primarily) run it in order with a scattergun of b) so it ends up being c).  If this is the case I don't think the time will be distributed evenly between the numbers (e.g. Science Fiction Double Feature could run for 3 months of 2021, whereas Dammit Janet might get two weeks...), it may run on ratios:

Using this frankly bizarre theory we might be able to make more specific predictions.  I realize this doesn't quite add up yet but at this point it's probably better to share the thoughts, see if anyone has any help and refine them along the way.

''The world*'' reacts immediately when you tactically suppress ''your'' ego in order to extend ''your'' range and receptivity.  Seeing that the safety lock on ''your'' higher powers is being tampered with ''the world'' steps in to boost that ego.  A thousand temptations appear to thwart ''your'' ''meditation'', and after a while you learn the cycles, Uncle Fester called them ''breaks''.  Mental anxiety, then physical itching, then cat meow/dog bark, then police siren, then music from upstairs.  Press on through that (bearing in mind that most cannot) and you start reaching some really interesting ''physical distractions'' - burning, physical spasms, sudden weather phenomena, electrical effects, etc.  It's clear that ''the world'' does not want you to meditate nor does it want you to know.  It's also clear that it's power in this respect is virtually unlimited.

The Apocalypse has made me use more brutal/rapid methods to achieve vision as time is very short.  The snapback on these methods is more intense and after some successful ''hunting'' with Artemis, the world decided it was going to Rocky the hell out of me.  By ''Rockying'' I really meant drowning me in inspiring coach speeches to boost my ego and block my ears.  After the third person started ''Rockying'' me, I actually got quite annoyed and defensive about it.  Stop fucking Rockying me, I said.

But then I reflected.  I've said Rocky four or five times in the last hour.  Does it mean something more? I looked through classic Rocky scenes for something but nothing apparent beyond him being a strong man... But Rocky Horror Picture Show had just come up in a path-walking...  Did it deserve more attention than I had given?  Am I getting back here in a roundabout way?  Was someone actually trying to help me with the word ''Rocky''?  Who was Rockying who?  And who was Rocky?  What does it actually mean to be Rockied?  Did it mean what I thought?  More on who or what Rocky is later on.

The focus in the news on the UK is shifting from keeping everyone's spirits up to go and take the vaccine to reporting on the damage done during lockdown particularly to children.  The archetype of the struggling single mother trying to look after her three kids is fading to reveal her primary kids who have missed a year of phonics because that mum has been, understandably, on her phone the whole time while her secondary age kids are now hooked on social media, games and porn.  Forget material drugs, kids, they are way too carbon intensive.  Around 2012 there was quite a lot of intervention going on around how long kids and adults should spend online from educational psychologists and the like. Around three was suggested to be within toleration.  Kids and adults these days are online for over ten hours.  And that's effectively ten hours in a hen-house ran by foxes. 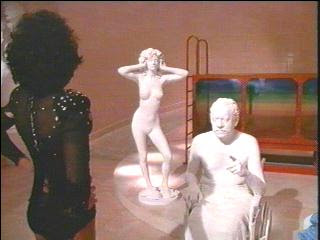 During the Lilith work on ''The Basilisk'' (Golden Eye) weapon system it became clear that the turning to stone aspect was going to be fairly literal - petrified, in terms of lockdown, meant both terrorized to madness and frozen in one place.  Inter-dimensional vampiric entities, like the one featured in Rocky Horror, are said to feed on lower emotional energy (inc. sexual energy) so whole populations being rooted in one place experiencing apathy, fear and desire was basically one of the greatest feeding frenzies of all time.  As you surely know by now, the film features some of the cast ''de-Medusa-ed'' into a transexual ''deviant'' form.  Honestly I don't personally care about your sexual proclivities, it's none of my business, but I am interested in how this all plays to ''Brad and Janet'' and how many of them have picked up all sorts of deviancies and addictions after being petrified.

Rocky is a Golem and as astute readers will note the link between Golems and Time Travel has already been set-in-stone.  If this Rocky Horror meta-theory is true, in the sense that anything can be true anymore, we should expect a lot of ''resources'' to be dedicated to Time Warp, whatever that is intended to mean.  At first glance the time warp can be read in several ways a) technological upgrade time b) time being fleeting during lockdown, other weird time phenomena c) the ''youthing ray'' I have discussed previously and other forms of ''necromancy'' yet to be d) a literal time warp.  Surveying the scene we see that Sabrina did the Time Warp, and even those crazy kids on TikTok are doing the Time Warp with their Tik Tok Time Warp Filter Challenge.  This filter (launched in 2017, but ''the challenge'' was last few months of 2020) seems to basically demonize you by slowing down time but forgetting that for a moment, they are literally doing the Time Warp again.  The voyeuristic intention, in this case, is not only the way the users view themselves and others, but its about how these kids are being studied through it to figure out what makes them... tick tock.

It's so dreamy
Oh fantasy free me
So you can't see me
No not at all
From another dimension
With voyeuristic intention
Well secluded, I see all
With a bit of a mind flip
You're into the timeslip
And nothing will ever be the same
You're spaced out on sensation
Like you're under sedation
Let's do the Time Warp again