2021 - The Year of Gamaliel, The Satanic Mechanic

Well you got caught with a flat
Well how about that?
Well babies don't you panic
By the light of the night
It'll all be alright,
I'll get you a Satanic Mechanic

THE CUP OF WATER

At 2 minutes 15 seconds into the video sequence for Sweet Transvestite you will see that Frank'n'futer throws a cup of water over the camera.  We believe that this splash relates to the incident of the radioactive phosphate pond in Florida - you know horrendous B-movie sci-fi nightmare fuel that spawns terrifying giant insects, that kind of splash - rapidly brought to a conclusion with flooding Tampa Bay with the waste water.  This might seem a strange place to start the post but I want to bring your attention to the tremendous detail with which this is being executed; it is looking like a very faithful rendering of the movie.

So Caitlyn Jenner appeared as a phoenix on The Masked Singer a few weeks ago, and announced an interest in running for office yesterday so people are wondering whether this is the Sweet Transvestite or just another one?  It's clear that at the very least something of a calendar of trans-events and reveals were organized around and after trans-visibility day on the 31st March.  You had the announcement of Dr Levine the first transgender member of the US cabinet (in a health role), you had Lil Nas X's Sweet Transvestite ''Gamalielian'' romp through Eden and Hell that caused a few hearts to flutter and now you also have Caitlyn Jenner's move into politics. So its also clear that the character of Frank'n'furter will be passed around a few ''actors''.  We already have precedence (lol) for this during the Time Warp as Meghan's interview was Columbia during her solo and Patsy Stevenson at the police vs feminist riots was Columbia during the dance.  You could even argue that Kate Middleton took on that role temporarily as she was also involved in the vigil.

At the moment of Caitlyn Jenner's reveal - the lyrics were ''by the light of the night it'll all be alright, I'll get you a Satanic Mechanic'' and Biden was talking about ghost guns, ordered in parts and then secretly reconstructed by people intent on mass shootings i.e. ''Satanic Mechanics''.  I thought they would play this with some kind of climate engineering thing but there you go it was even more literal and direct than I thought.  Ghost guns?  Really?  The name Jenner also means ''engineer'' and you have the old potential vehicular manslaughter that went away as another possible tie-in.

LET'S DO THE TIME WARP AGAIN

If you remember Prince Philip was synced with  our interpretation of Time Warp where he was equated with the skeleton in the coffin at the start of the song because of going into hospital with heart problems at the time.  The other key characters were:

Now immediately after the Satanic Mechanic lyric in the video (from the cult movie) i.e. today, the 9th of April - Mag, Columbia and Riff Raff rejoin the Sweet Transvestite to make the final tableaux for the song. The death of Prince Philip will cause that tableau to form from the perspective of the media i.e it will transplant those characters from the last ''song'' into this one.

COME UP TO THE LAB 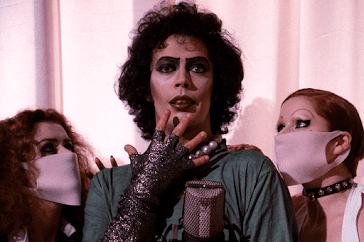 These are the next lyrics that cover the next 5-6 days that are left (+/- 1 because of limit of accuracy).  You can check back on our thinking at the original working post with the calendar and see how and where it is adjusted by facts on the ground but we're not so far off:

10th-11th April
''Why don't you stay for a night
Or maybe a bite,
I could show you my favorite obsession
I've been making a man
With blond hair and a tan
That's good for relieving my tension
12th-14th April
Sweet Transvestite chorus again
15th-16th April
So come up to the lab
And see what's on the slab
I see you shiver with anticipation
But maybe the rain
Is really to blame
So I'll remove the cause but not the symptom...

According to one of the Apocalypse Squad the ''see what's on the slab'' and ''maybe the rain'' lines prob. relates to the promise of vaccination offers for all Americans (by the 18th April...?) - the rain & storm having already been established as ''Covid-19'' in ''There's a light Over at the Frankenstein's place'' and also by dint of association with Lilith, the Queen of the Evil Winds and the demon of 2020.  The cause, ''covid'' is removed then but not the symptom i.e. all of the messed up things in the world that Covid (2020) has exposed - mental health, employment, race/gender issues and all that jazz.