2023 - The Year of A'arab Tzereq, Invasion of the Body Snatchers, The First Quarter (Working Document)

Jack: It's a big conspiracy.
Matthew: What's a conspiracy?
Jack: Everything. 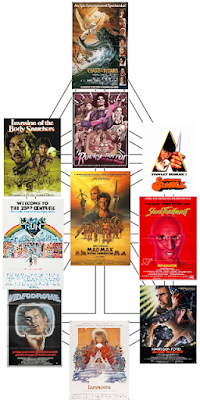 As promised myself and the Apocalypse Squad will now provide a rough overview of 2023, starting with the 1st quarter, following the script of Invasion of the Body Snatchers with a little bit of help from Claire Audience.  We are not going to do this minute by minute like Rocky Horror as, although the Devil is in the Details, we will lose ourselves in the minutiae and we are not currently aware of what I have referred to before as ''structural enrichment'' yet.  Like the posts in 2021 we will present this as a working document which I can then supplement with your comments and opinions as well as my own research over the next few days.  When we have completed all four quarters we will provide a master copy here.  As the Squid Game has progressed some of the choices have become more and more obvious - look at our potential ''cast'' below - and it is entirely possible to engage with this through pure reasoning without any psychic or occultic assistance.  Although some of my peers are very wary or mistrustful of such abilities or practices I believe, like many other gnostically inclined folk, that these skills are inherent in a great deal of us and we have been systematically robbed of our own true heritage.  I know it doesn't feel like this right now but Light Magic is as real as the Dark.  To quote a diminutive grey spirit I met at a halfway house a long long time ago, these powers are part of being a real human being, one who drinks from the depths of their soul.  Yes it is risky, I'm not denying that.  So is mountain climbing.

I do not want you to think that I have abandoned A Clockwork Orange (now being wonderfully detailed by Journeyman at Hotel Apophenia) - that circus will obviously continue with its parade of Alexs, Alexanders, Alexeis, Oleksiys, Alexandras, Alexandrias, Alessandras, Dmitris, Vladimir Vladimirovichs, Peters, Petros, Pedros and Pierres, the milk references, the economic decay, the ultra violence, the overt and blatant use of orange signalling, the ''singing in Ukraine'', the crime and the punishment - 2022 is like being trapped in a giant gif of this movie, and like Alex and the Ludovico Technique we are all being mind-controlled by the repetition of this orange doom cycle - passified and defanged.  As we approach this MKUltra moment, the climax of the film, it is going to get very very meta and expect many of the public narratives to do a complete 180 degree flip.  Anyway feel free to comment on ACO in the comment section of this blog as well, I can handle both narratives simultaneously and thanks to Journeyman we have parallel pages.

To reiterate I wanted to get ahead with IoBS as this is a movie that truly scares me, several scenes in particular - Dr Kibner's betrayal, Amazing Grace, and of course the finale.  As mentioned in my first post on this subject - 2023, the Year of A'arab Tzereq - I also find this to be a deeply tragic love story that touches me in profound ways, not so much the body horror, but the assault on something more rarefied about Aphrodite. She is one of the few goddesses I have worked closely with and as I remain something of an acolyte of hers, I will feel personally attacked by this upcoming assault on her Temple (in Netzach, according to the Golden Dawn system).  I can emotionally handle the bio-political warfare and the immune failure and ultimate betrayal of many of my friends and family, but less so the death of love itself and the triumph of despair, the snuffing out of the soul.  I need to face these demons, the Ravens of Dispersion, now, in good time, so I can ''be there for you'' when all these seeds that have been sown come to their dark fruition.

In the spirit of a comprehensive study once we have provided the overlook of the quarters we will examine two other possible movies that could be used to structurally enrich that cycle - Soylent Green and Beneath the Planet of the Apes.

Finally Mr Sutherland, if you're reading this I just want to say Great Work, maybe your best.

STARRING (IN NO PARTICULAR ORDER AS OF NOW)

Important Note: As we learned last year the ''Trailer'' or Pathwalking between the Sephiroth will run parallel to the end of A Clockwork Orange and begin in Halloween.  So expect a lot of weird alien news around that time.  The ''trailers'' are their way of including these paths without which the Great Work of the Demolition Team would not be complete.

January (Words Are) - Geofree - immigration crisis - slow build into February and beyond (plays into "Great Replacement" fears)(Also syncs with Planet of the Apes and Alien 2), Transamerica (this is the spire/spike building), push for children's ability to "consent," more random daylight attacks in public

February - microbiological investigation of rise in leptospirosis and salmonella (basically these are fundamentally opportunistic infections that I talked about in my first post on 2023, a tripled friend of mine already had her neck swell up like a balloon and the doctors are saying ''Weil's Disease''); rise in sleep disorders possibly tied to SADS (don't sleep you might ''die'' will be a recurring theme in 2023); personality changes in vaxxxed become more noticeable; unvaxxxed and vaxxxed split couples; trash - recycling; rainbow banjo guy with dog (Harry i.e. prob. Harry Styles could be Prince Harry), ''fake'' food i.e. rise in fake fish, field investigation, giant rats; Jeffrey Epstein; asian food; dramatic rise in affairs, divorce, marriages breaking up over change in sexuality (woke related i.e. pod people); San Francisco skyline (obv. 'frisco is Woke HQ); eye change is important indicator of being podded (we already see this in vaxxxed - cloudy, diluted or dull eyes)

March -  weird reports about personality change from China; money laundering stories; trash - recycling specifically textiles; growing awareness of the truth of some conspiracy theories (Alex Jones was Right kind of stuff), Jeffrey meets with strange people in official building (Epstein revelations links to conspiracy, who was on that island, what was on the tapes that were made there, etc), UN, WEF, G7 etc news; celebrity psychiatrist has book/show on post-pandemic disorder (to explain personality change); Sahara desert news, desertification link to famine; ''death'' of David Icke; we meet ''Jack'' - when the group of four are assembled we will start seeing the ''Friends'' references I started this post with, many Netflixers have been playing Friends on a kind of soothing nostalgic loop for a while now, this will be ''used'' somehow in the same way Britney was in 2021.

Elizabeth: How are we going to get out of here?
Matthew: Through the door, come on.

P.s. I realise this is incomplete at the moment.  We will update it in real time and I want to get started.