Twin Peaks, Painting by Numbers IV - This is the Chair, Chesed

After Twin Peaks Episode 8 I made a prediction (according to the Kircher Tree hypothesis) that the following episode would be the ''Chesed'' one and predicted it would feature a lot of blue and be a comedy.  Lets see how well that stacks up and subject the episode to some deeper qabalistic analysis. 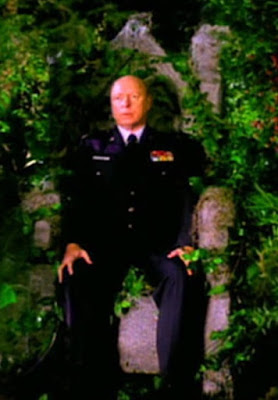 The magical image of Chesed is a man seated on a throne and the episode is called ''This is the Chair''.  The ''chair'' or throne ends up being revealed as the Chair of Major Briggs, one of the nicest, gentlest, kindest characters of the Twin Peaks saga always dressed in his distinctive navy blue and suitably representative of the forces of Jupiter both in his characteristics but also by dint of the fact that he is a major in the USAF.

The major theme of the episode established (Briggs and Mercy/Loving-Kindness) lets look step by step as the characters walk the paths of the Tree of Life and Lynch continues to Paint by Numbers.  Evil Cooper takes the red kercheif from the fence (Chet - path of chariot, Binah to Gev. mentioned at beginning of Ep. 8) then enters farm - here we see him treated mercifully by his minions and his red shirt is juxtaposed between the blue of their costumes.  Evil Cooper then calls his agent in Vegas who is wearing a blue suit with squares (the shape of Chesed - 4).  The conclusion of this sequence shows Cooper between the two blue minions but now instead of red he is also wearing blue. 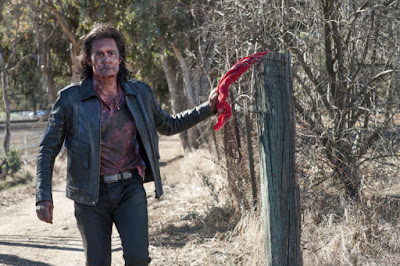 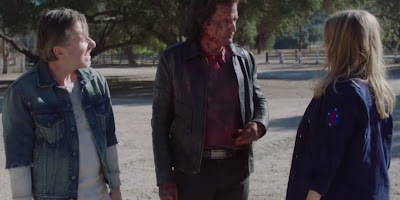 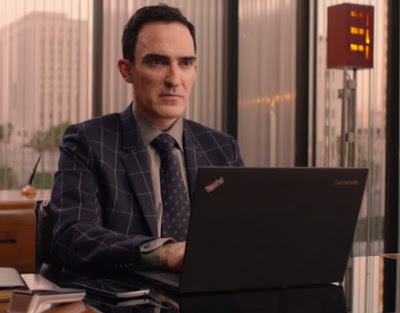 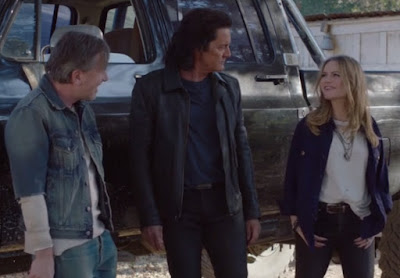 The first image we then see of Douggie Cooper is him against a blue flag, then we have the three heavy set cops (weight gain is indicator of Jupiterian expansion) where the central laughing policeman is wearing a blue suit, blue tie with white circles and on one side is the cop with Green tie (Netzach)  and on the other is the red tie (Gevurah) both with diagonal lines.  In the Kircher Tree the path leading from Netzach (7) to Chesed (4) is the hebrew letter Kaph, the palm, and this symbol is rendered into the film when the police (the boys in blue) catch ''Ike the Spike'' the line is: ''we have your palm print, in fact we have your whole palm'' - more laughter ensues.  The use of ''palm-reading'' is also seen earlier in this sequence when the policeman conspire to get Douggie Cooper's prints in one of the opening scenes.  This use of palm is very clear evidence of the Kircher Tree Hypothesis that I have been exploring here. 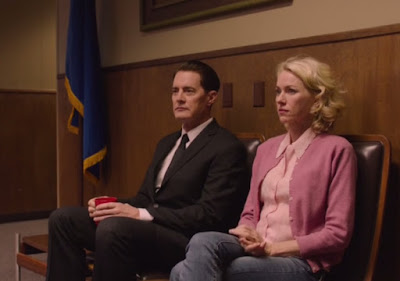 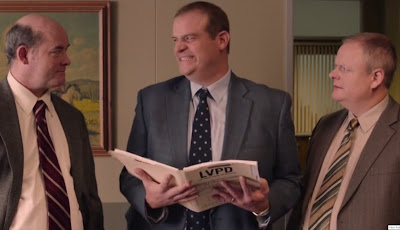 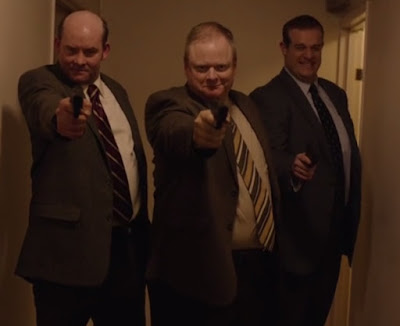 Then we have a brief scene of Johnny Horne wearing blue pyjamas running into a wall and lying next to a picture of  a water fall.  In the Hermetic Qabalah Lynch is using the elemental correspondence of Chesed is water. 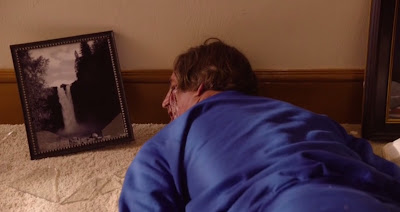 The examination of Major Briggs' body follows next and note the identical blue ties with their distinctive diagonal (now indicating the diagonal path of Yod from Tiphereth to Chesed - the ring and the reference to marbles might link to the seed concept here - we also have the fusion of male and female, and the headless rite) stripes.  Note that Diane was established as Tifereth (yellow - HGA) in a previous epsiode and the agents are now moving to Chesed.  Note Tammy in blue making the diagonal line with Diane on the steps outside whilst Gordon Cole smokes (in putting himelf into this drama to what extent is Lynch really walking the paths himself here...?  The writer/director is search of his characters)  The final long scene of this sequence is Hastings, a man whose actions have been motivated by loving kindness (his love of his lover and his obsessive search for other dimensions), begging for mercy from Agent Preston and who just wants to go to the sea (water). 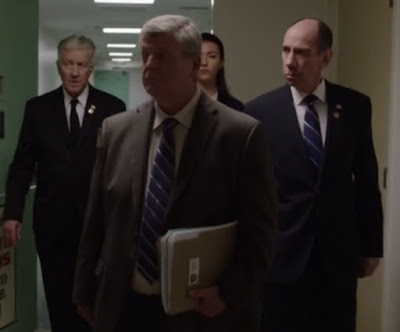 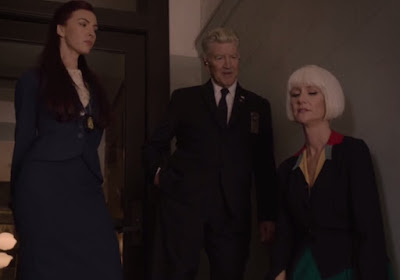 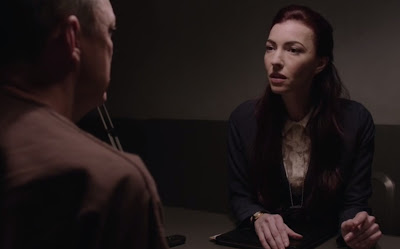 Since this is one long film the overlap is not exact and I would argue that the Chesed sequences ends with this interrogation and we begin the next sequence which should either be Binah (where I expect we will see Audrey who will be the Dark Mother) or Douggie Cooper crossing the abyss.  Due to these two rather rough characters in the bar one of which has a rash from drug use, I am expecting us to head into Binah - we might see the drug mother from the first few episodes show up again plus a whole bunch of other dark mothers (AIMA, AMA themes - path details a relationship between Diane and the Dark Mother, Tifereth to Binah, path symbolism is ''the Lovers'' and ''a sword/weapon'' Zayin).  ''Chesed'' was not as funny as I thought it would be but the laughing policeman was pretty damn funny, Gordon smoking was funny awkward and the final interrogation was hilarious and harrowing at the same time.  What we have discovered if we didn't know already is that Gordon Cole is effectively the new/old Cooper and he is ''initiating'' himself by putting himself through the paths as actor, director, sound designer and writer.  Its also clear that the symbolism relates mainly to the characters outside of Twin Peaks so Twin Peaks is Kether, the White Lodge and where all the paths eventually converge.

I am about to leave on a pathwalking of the Adriatic so I won't be updating for a couple of weeks and I want to remind people that I do not use the Kircher Tree system that David Lynch is and these posts are no endorsement of that system just an analysis from someone who once practiced it but then got access to superior sources.  Although people are sometimes critical of the way I am detail oriented about the paths on the Tree of Life this is to get perspective and subject my Qabalah to where it is situated now i.e. with far greater access to superior sources than the G.D. boys had.  I think it is Kircherites, who aren't aware of other versions of the ToL, who are more likely ''to miss the wood for the trees'' than someone who at least does some comparison - maybe we can eventually argue that about David Lynch, who knows?  Don't get me wrong I love the magickal artistry of Twin Peaks but I think the Kircher Tree can be dangerously unstable and is based on a fundamental design flaw.  Part of my evidence for this is the amount of suicides and megalomaniacal psychotic breaks it seems to be inevitably involved in throughout its history of use in the West.  Maybe magick just attracts these kind of folks, maybe they are wiring themselves up wrong, maybe both.  Lynch may surprise me by resolving/rectifying the Tree in the course of the saga (in a kind of ''Tree of Return'' fashion argument sometimes deployed to allow for the starting error which is Kircher) but I think it is more likely this is going to play out in a very G.D./Thelema type way.  Again I am not condemning the whole thing, there are lots of good things, esp. in the AA curriculum of reading and their analysis of the ''grades'' but the tree itself is faulty as AC himself pointed out and that Charles Stansfield Jones attempted to correct for but made it worse.  At the very least modern qabalistic circles should adopt a Tree of Gates type approach where the paths begin as flexible to the letters (start them in the woods) as opposed to starting people down a false path and then forcing them to correct! - the whole thing is barbarically wasteful. 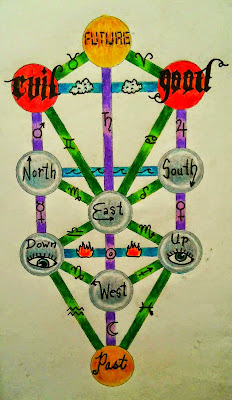 If I could again direct people to study the following posts which are about the biological cross-overs between ''qabalistic alchemy'' and modern science - your time won't be wasted in a deeper understanding of your own microcosm.  For the twelve zodiac signs it is enough to compare and contrast the zodiac glyph with the diagram I have given you from basic genetic rhythms and let those ideas percolate, don't worry about the scientific details but feel free to explore in depth if you want to get into them.

Posted by Blogos at 3:30 AM No comments: