Anti-Time Clones and the Blessing of Yesterdays


Last night I had another one of those David Lynch dreams.  He (Raziel?) was explaining to me the concept of time travel specifically the relationship between time and anti-time (consciousness).  I was confused by the idea that anti-time runs against the flow of time (remembering past lives, predicting, analysing or otherwise side-stepping, prophesising the future, etc) as any point of contact between the two wouldn't form a realisable perception because the two perceptual faces couldn't be resolved into a single experience as you would be facing both ways.  He explained to me that although anti-time runs against the flow of time it does so as if it were a car reversing so the face of time and anti-time always face the same way.

Imagine two (infinite?) queues of clones - a realisable perception of the moment would only occur at a point of contact between two clones in the parallel lines since both time and anti-time are necessary for that to happen.   The line of anti-time clones are walking backwards, the line of time clones forwards so the clones don't move in pairs but are always changing partners.  ''You'' are not a time-clone on a journey through - the sense of ''you'' emerges as a contact between the opposing parallel clones - a time spark (Yechidah/Chiah?).  Since they are clones however the memories of past and future are shared, so by accelerating one line you can bring a different contact between a time clone and an anti-time clone at some point in the future or past.

This dream was caused by a thought experiment about a spell I call ''The Blessing of Yesterdays'' a time spell whereby at the end of each day you bless the day before.  After getting into the habit of this your future self will theoretically bless today from tomorrow.  This dream message seemed to be explaining some of the mechanism for how that works - a theory of assymetric trans-temporal magic challenging the inherent presentism of mainstream occulture.

This has not however stopped their earnings from pushing back the boundaries of hyper-mathematics, and their chief research accountant has recently been appointed professor of neo-mathematics at the University of Maximegalon, in recognition of both his special and general theories of Disaster Area tax returns, in which he proves that the whole fabric of the space-time continuum is not merely curved, it is, in fact, totally bent.

Should non Jews practice the Kabbalah?

So the other day I chanced upon a comment from an associate of mine which said that you should not practice the Jewish Kabbalah if you are not Jewish.  My first reaction was, of course, how could I ever possibly un-practice and un-direct experience those years of my life spent in transgression or whether I am completely beyond saving?  Then, taking a moment to quell my rising panic, I began to reflect on the implications of this latest edict as a great portion of the Western Mystery Tradition from the high Middle Ages and the Renaissance has been the study and practice of the Jewish Kabbalah - be it Gematria or working with Hebrew angels.  If you are not Jewish surely you can't practice Christian Cabala instead - a much bastardised and culturally appropriated form of the system - that would only add insult to injury?  Hermetic Qabalah is possibly even more criminal. The only solution would be to completely amputate the Kabbalah and all related subjects from the canon of the WMT so no one would ever run the risk of even accidentally breaching this edict.  You see how dangerous this line of thinking rapidly becomes?

The truth is that the Jews, like all races and religions do not exist in a vaccuum, there is/was considerable cultural mingling with everyone around them in ''the beginning'' (if there is such a clear date in historical reality) and in the diaspora afterwards.  The Kabbalah, in the sense of that understanding of a universal system begun in the 11th century (which itself is clearly influenced by Catharism and accompanying beliefs, Catharism itself a migrating system from the East) has its roots in the cosmopolitan culture of the Levant and Mesopotamia in the early parts of the 1st millenium (Sefer Yetzirah, etc) and many more influences which extend back into the dawn of civilization (Egyptian letter magic, Babylonian astrology, Zoroastrian Angels, Greek philosophy and mathematics, etc).  While the Jews made contributions and produced a fusion of the ideas that was all their own, there are a variety of similar works in letter magic all over the world.  The position is, of course, absurd, full of contradictions and ill-considered consequences.  If upheld the logical conclusion would be that no person who is not of a race or religion should practice that culture - what does this do to Paganism in the larger setting?  Can only people who prove they are authentically Greek (whatever that means considering the Slavic influence) work with the Greek Pantheon etc etc?   What about Egyptian magic?  Is Josephine McCarthy, for example, authentically an ancient Egyptian? If I am "English'' does that mean I can only work with the English Cabala instead? Spare me this madness at least!

This brings us back to the subject of reincarnation and that it is a widely held belief in the esoteric community that few seem to genuinely embrace.  Have I only been reincarnated from within my DNA's own timeline?  Can I only investigate something I have ''physical'' genetic roots in?  We must have a racially secure and culturally homogenous esoteric experience!  What??? - this is creepy.  Having been an animal, or a differently coloured, differently abled human in past lives, (and an angel in future lives), our experience creates compassion for animals, differently coloured, differently abled people and angels - leading to a more tolerant personality and a kindness towards all life-forms.  When we tap into that trans-temporal self we enable kindness, forgiveness, curiosity and wonder towards all life and consciousness.  On the other hand what I see continuing to rise, in comments from within our community like the above, is conservatism, judgement, constriction, boundaries and division.  I think the root of it might be a lack of creativity in certain quarters and a corresponding desire to shut down wonder and imagination - who knows?
Posted by Blogos at 1:45 AM 3 comments: 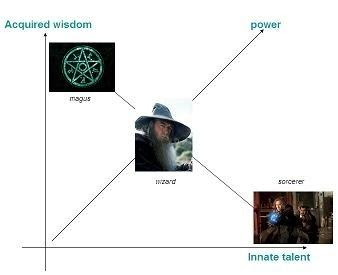 I found the graph on a dungeons and dragons website but it kind of sums up the sense I am getting from all the constructive friction between these two opposing groups.  There also seems to be a correlation between the assumed title of magus and transcendentalist approaches and the assumed title of sorcerer and immanent approaches.  The Magus seems focused on a series of psycho-spiritual initiations in order to access the beyond whereas the Sorcerer seems unconcerned with this and primarily uses magic to satisfy earthly desires.  Generalising, ''sorcerers'' seem absolutely convinced that this is the 'real world', have no questions about it, and their ''results'' oriented modus operandi seems to be entirely about physical gratification - as Rufus stated in a recent post ''getting laid or getting paid'' - as opposed to more philosophical/metaphysical inquiry.  ''Magi'' on the other hand often seem to present an aloof ''qabalistic'' philosophy that puts them on a trajectory to a beyond outside of this dimension (and better than yours...), a transcendental ''other'' - whereas Sorcerers are just ''missioning'' about in this one; getting in adventures and such.

Our graph needs a z axis though! I remain unconvinced of the immanent in the sense of a shared physical world because I have never directly experienced it, only indirectly through the intelligibility of my senses to my [idea of my] self - I am also unclear as to whether this reality is ''editable'' in any sense which would pour doubt on the notion of sorcery itself.  Similarly I am not convinced of an accessible beyond mainly due to the problems that come about with trying to understand/experience infinity - i.e. that it can have no position or size etc therefore it is impossible to actually ''go there''.  Any other dimensions we are accessing that we might consider a beyond, are still natural, we don't need a ''supernatural'' persay. I think the dichotomy between spirit and matter outlives its usefulness fairly rapidly and we're going to find ourselves a lot less limited if we start rethinking our models in terms of time and anti-time (consciousness).  I don't think we need a ''physical'' and a ''spiritual'' with a neat little dividing membrane that the spirits live behind I think the notion of an entangled ball of threads of time and anti-time with no actual ''base'' physical/spiritual reality will provide a lot more explanatory force in the long run.

So this brings me to wizards (!) and why I am bringing them back.  Looking at the above most of us in the community are in fact wizards, we exist in the social-spaces between players at the extremes learning from both and concocting our own fusion, our own lines on the graph, philosophies bending and twisting under various influences.  Its not as simple as ''sorcerers'' or ''mages'' being right or wrong - neither the transcendental nor the immanent are actually understood by any of these people - its almost certainly a bewitching mix of the two or a paradigm shifting concoction (the z axis) that few of us have even yet conceived.

Wizard! I'm bringing it back.