The boys watch the girls while the girls watch the boys who watch the girls go by
Eye to eye, the solemnly convene to make the scene
Which is the name of the game, watch a guy, watch a dame on any street in town
Up and down, and over and across, romance is boss
Guys talk girl talk, it happens everywhere
Eyes watch girls walk with tender loving care.

In Netflix's latest offering ''The Pentaverate'' a quintet of ''nice illuminati'' wearing orange (along with their Merovingian Liechtenstein Guards), lit by orange lights, tickled by orange detailing in set and property, triggered by ''orange alerts'', parade through a series of fart jokes, nudity jokes, Kubrick references and mixed conspiratainment to contrive a story about a series of orange clockwork mechanisms and an end to climate change, the current version of the internet and the activation of the ''Demetrius'' (Dim) Protocols. There is even one Russian present in the Pentaverate to make sure you understand that they are as much part of this operation as anyone else. Are they watchers readers of the Hermetic Lessons? You betcha eh!  By the way she was brilliantly cast, hats off.  Its tremendously detailed.  Even JB is in it FFS. 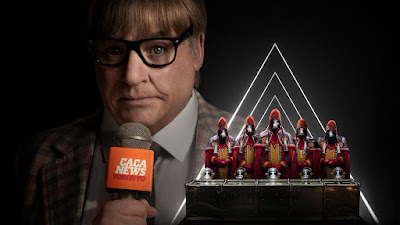 This limited series keeps returning back to the cogs of the clockwork mechanism and the keyholders who operate them and this idea of smaller and larger wheels that interconnect is absolutely necessary to understand the operating structure of 2022.  As I have said before its far more complicated than 2021's inner and outer wheels of plot and it is more likely that certain segments of the movie are ran in loops that interact with other loops as per the remote viewing vision (A Clockwork Orange Experience) and possibly mirroring the MKultra scene in the film itself.  Army of Thieves that Netflix launched in Halloween '21 (for my ''Trailer''/Qabalistic Path little Brothers) again referred to a series of orangesque clockworks (Thieves being one of Hermes hosts) these ones opened by Ludwig.  There is a head of the snake which some of us are doing well in tracking but it doesn't particularly matter whether you have got your eye on the head or not as it is a constrictor as much as it is a viper. The snake does not care whether you are part of the Orange Amber Herd Heard, The Alex-Dim-Off, or the Trucker Convoy only that you remain in its coils.  This is why our mileage differs a little.  Again not to be specific here as I have not drilled into the specifics (I did not observe a good enough model of the actual cogs to do this) but in general, places like China have been in the ''Prison sequence'' and places like Canada have been in the ''Ludovico sequence''.  If we want to get a more accurate perception, and I am not so sure of the usefulness of this beyond morbid curiosity regarding the diabolical locksmiths of this round of the Squid Games what would be a useful first step in cracking this safe would be to lay the plot of the movie not only over the year but also over the globe, one useful visualisation would be to imagine the cinema film roll itself wrapping around the planet and constricting it, fitting various frames to various countries - I may or may not have gotten that from a printout of a powerpoint slide these droogs left lying around. Even if we eventually open the safe, on the island, the only thing we will find is snakes. This is not a treasure map and there will be dragons. 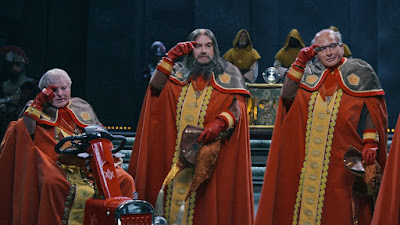 Important update for those of us trying to time-hack ourselves at least as far as 2026, the spectre of C. Auris has begun to emerge and the rest of the A'arab Tzereq that it brings with it.  Drilling down into what dying ''with'' covid really means you see we find it means people being eaten alive in hospitals by various superbacteria and malevolent fungi.  You may have recovered from covid in somewhere ''clean'' but unfortunately these creatures got into the wounds created by the various tubes they put inside you or through your drug-suppressed immune system - so what Covid actually did was knock you to the ground and the others then just piled on.  Messaging regarding this is going to get worse and quickly.  And this is part of the broader picture of what is going on i.e. fostering ''global biosecurity'' a concept that has multiple arms - climate change released organisms, multi-drug resistance MDR and a new era of medicine, CRISPR counterterrorism, bio-defence infrastructure (plastic shields in shops, UV cleaning of public transport) and a propraganda that ensures more people are masking and washing their hands generally.  Lilifluenza was a poster child for the whole legion of invisible microbiotic and nanobiotic demons that we face.  Biosecurity is a committee that sits with and works in cahoots with climate security, digital security, financial security, cosmic security and make up the elements of an organization actually known as the Gorgoneion.  I wish we could have an adult conversation about this in society but we can't because society is now a kindergarten horrorshow.  This state of affairs will not be noticeably reversed until at least towards the end of 2026 (your current mass formation psychopath herds peak in 2025-2026 with ''Shock Treatment'' and a large part of ''Logan's Run'') when there will be enough momentum in the revolutionary movement, that will of course also be directed and controlled towards, if I paraphrase the Pentaverate here, achieving a ''nice'' Eco-fascist social contract for 2030 and beyond.  If you are getting the joke now, then believe me 2026 has absolutely hilarious moments in it that almost make it worth the time-hack by themselves to enjoy in person - especially when they start ''cancelling'' shows that have anthropomorphised animals in them like Berenstein Berenstain Bears or Merovingian Sylvanian Families.  No more spoilers but the animal ethics part is going to be incredibly funny.  No one cares about the animals!  I agree and you are also an animal that no one cares about.  But what if we could talk to them, eh..?

I look forward to seeing you all at my interview and I do expect a helicopter with a number 5.

It's keeping track of the fact watching them watching back
That makes the world go 'round
What's that sound, each time you hear a loud collective sigh
They're making music to watch world's go by