At random. Dispassionate, fair.  The rich and poor alike.  And they called me a madman.  And what I predicted came to pass. 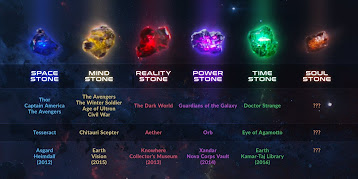 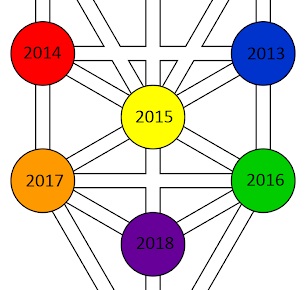 In Producers: Infinity Budget a virtuous Unifying Colour Producer attempts to capture all the Imagination Sefiroth in order to bring about the Apocalypse Qliphoth where 50% of humanity are annihilated to save the world from climate change.  Now I have your attention, the core advantages of the Unifying Colour Theory, as it stands, are that you can backcheck it, see above, and also use it to make solid predictions, dark conclusions and meta-theories.  Those of you following this work will know about the Purpocalypse and the Silver Squeeze as well, and will note that we are systematically ''ticking off'' the correspondences of Yesod - one by one.  Those of you following the Covid restrictions will be beginning to see a new ''darker red'' colour entering the various restriction schemata and in California there is even discussion of a purple tier... and yet the dark conclusions and meta-theories may prove of even greater value. 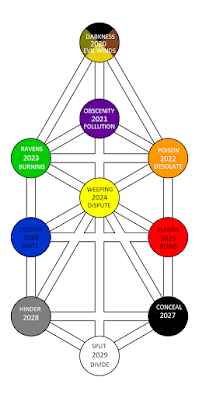 The First Dark Conclusion is the one we are living through right now i.e. that the descent through the Tree of Life implied a consequent descent through the Tree of Hell.  The Unifying Colour Theory implied that 2020 would be the Qlipha of Malkuth or ''Lilith''.  As you can see above, the Qliphoth is a reflection of the Tree of Life so we descend in reverse order.  This reversal was successfully applied to the Theory in the reversal of the alchemical colour coding of Malkuth in Lilith.  We saw unifying evidence of this application in the major movie release of 2020: TENET, the first forwards ten indicating Malkuth, the reverse ten indicating Lilith as well as signaling time travel , a core concept in this whole metaphysical crimescapade, and one which we should not underestimate the importance of.

The Second Dark Conclusion was around the concept of doubling or cloning which countless unifying movies signified.  As we ascend the Tree of Life we ascend through various fragments of our divided self, unlocking aspects of our being and seeking ultimate unification and the apprehension of clear mind.  Descending the Tree of Life implies dividing and fragmenting the self into different pieces, applied globally we can see this as a great shattering of the minds of the populace.  We can also see it as implying an intentional outcome of incredible importance for 2029, ''Split'' i.e. (the) public (reveal of) human cloning.

More than this, the Descent implies a shadow self waiting in ''the other realm'' which has to be faced with Perfect Courage in order to maintain a sense of cohesion throughout the unfolding apocalypse.  Now the idea of interdimensional possession acts powerfully upon the imagination but something more prosaic can have a similar effect.  For years many have been unwittingly feeding a shadow self, made out of the darkness of their data and interacting with it, teaching it so it may be more like them.  Furthermore, the pandemic pushed many people beyond the limits of the amount of time they should spend on line in the Skinner Boxes of social-media/pornography and this has contributed to serious personality derangement and a burgeoning mental health crisis.  I think it is conceivable that there is a psychological tipping point for individuals where that psychological shadow self begins to swap with the real self and that this is now indeed happening and will continue to happen en masse.  Insidious.
UNIFYING COLOUR THEORY: METATHEORY#1

In the original scheme the movies weren't only associated with the Sefiroth but also the paths around the Sefiroth.   In 2018 then the Unifying Movies will have been associated with one of the four paths leading to/from Yesod so where Annihilation would definitely go on the path from 2018 - 2015 (Yesod-Tifereth), Avengers: Infinity War might go on the path from 2018-2019 (Yesod-Malkuth). Bohemian Rhapsody probably goes on the path from 2017-2018 (i.e. the Mercury association to Hod/Orange) but Hotel Artemis should perhaps be on this same path.  Mandy may be ''on the path'' from Yesod to Malkuth and Colour Out of Space (2019), produced in the following year from the same producers, looking at the imagery in the film may have represented the corresponding path from Malkuth to Yesod.  As you can now imagine this meta-theory rapidly sprawls but I think we can see something of a glimmering in here. 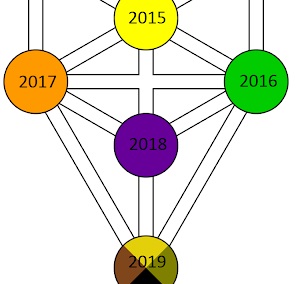 UNIFYING COLOUR THEORY: METATHEORY #2
While 2010-2019 the Unifying Colour Theory was ''in the movies'' from 2020-2029 we are ''through the looking glass'', ''on the other side of the screen, darkly'' and are reversing through the themes detailed in those movies.  What was once in the movies is paraded on the stage of the (what used to be) real world.  Therefore it stands to reason (lol) that the key themes (for inversion?) of 2021 (Gomaliel; The Qlipha of Yesod) are those themes explored, prefigured, and foreshadowed in the movies of 2018 (Yesod).  Can we see in the Gamestop debacle and the Silver Squeeze driven by WallStreetBets(inverted?) echoes of Ready Player One?  Can we see the Oasis in the ready rise of virtual tourism?  Similarly are the mutations/strains/variants discussed in Annihilation crystallizing as the mutations/strains/variants of Lilifluenza?  Or are we just now meeting what has been waiting for us on the other side of the mirror?
Several of the movies above, and movies throughout the Unifying Colour Theory in general, contain the theory and practice of time travel and each year approached that theory slightly differently.  When thinking about time travel we may also want to include some more prosaic techniques alongside our various imagined metaphysical crimescapades.  For example a youth-ray would constitute time travel, of a sort.  A youthing-ray that bombards you with nostalgic imagery, cute pre-school emojees, Disneyfication beams, etc, in order to infantilise you and make you go yay! more suggestible would have serious military applications.  So you think about that Tammy.
This meta-theory is now back-checkable (just compare and contrast the movies of 2019 with the realities of 2020), suggests that 2024 will have the same themes (in part? inverted?) of Mad Max: Fury Road and therefore could also be comfortably described as a dark conclusion.

When I'm done half of humanity will still be alive.